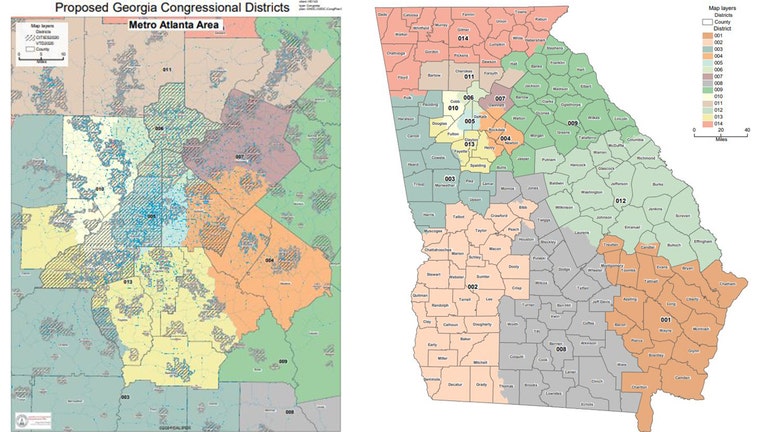 The proposal would likely split Georgia’s congressional districts 7-7 among Democrats and Republicans, compared to the current 8-6 GOP majority. Republicans have already proposed one map that could create a 9-5 Republican split, and additional plans tilted toward the GOP are likely.

Georgia’s redistricting showdown is drawing near, with Gov. Brian Kemp having set Nov. 3 as the first day of a special session to create new maps for Georgia’s 14 U.S. House seats as well as the 56 state Senate seats and 180 state House seats.

Lawmakers must redraw electoral districts at least once every decade following the U.S. Census to equalize populations. The process is an important factor in which party will hold power for the following decade.

Once-secure Republican majorities have eroded in Georgia, especially in metropolitan Atlanta. A decade ago, Republicans controlled 10 of 14 congressional seats. President Joe Biden and U.S. Sens. Raphael Warnock and Jon Ossoff proved it’s possible for Democrats to win statewide. But redistricting gives the GOP a chance to shore up its hold on power in the state and aid the party’s effort to take control of the U.S. House.

Democrats argue that their new map is superior because it creates six districts with majority nonwhite populations, recognizing that’s who’s driving population growth in a state where whites may already be in the minority.

"It should reflect our diverse population," Democratic U.S. Rep. Sanford Bishop of Georgia said in a telephone interview. "It should allow voters of color to elect the political candidates of their choice.

Bishop also said the map should reflect a state that the recent narrow Democratic wins show is divided 50-50.

"Georgia’s voters are pretty much divided equally," he said.

Bishop said the map shows it’s possible to redraw districts in a way that "objectively reflects the preferences of the people of Georgia." That’s likely to be an argument Democrats make to voters, and possibly to judges in lawsuits challenging any Republican map.

The Democrats would take middle Georgia’s 10th District, from which Republican Jody Hice is stepping down to run for secretary of state, and move it to Cobb, Douglas and southern Fulton counties. They would make Republican Marjorie Taylor Greene’s 14th District stretch across the state’s entire northern border, shifting Republican Andrew Clyde’s 9th District south and east to center on Athens. Republican Barry Loudermilk’s 11th District would exit Cobb County and instead add Forsyth County and part of Hall County. Democrat Carolyn Bourdeaux would get a district that includes only parts of Gwinnett County.

Democrat Lucy McBath’s 6th District, targeted for GOP-favoring changes in an initial Republican plan, would be almost untouched. The Democratic plan would leave most incumbents seeking reelection living in their districts, unlike the initial GOP plan, which would leave Loudermilk and Clyde outside their lines. U.S. House members aren’t required to live in their districts, and Georgia Democrat David Scott has long lived outside the 13th District he represents.

For the first time in more than 50 years, Georgia starts redistricting without federal oversight. A Supreme Court ruling in 2013 removed mandatory federal approval of new maps for Georgia and all or parts of 15 other states with a history of discrimination in voting.