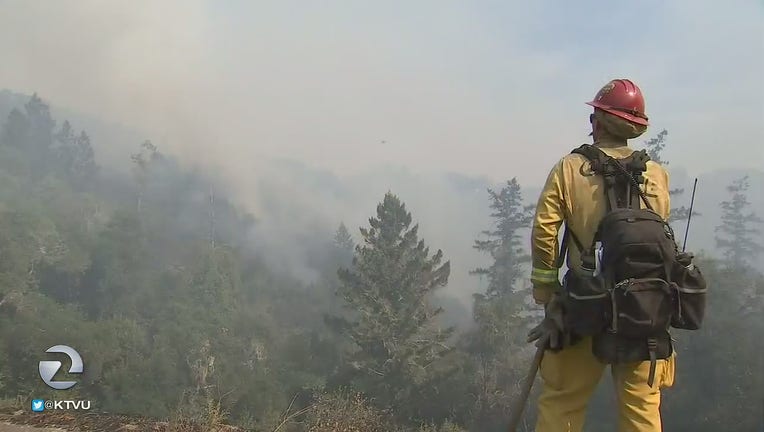 A firefighter looks out over the hillside as the Kincade Fire burns in the background.

GEYERSVILLE, Calif. - Cal Fire on Thursday reported that the Kincade Fire is now 65% contained after having scorched 77,758 acres.

The winds had subsided substantially, with a Red Flag warning expiring Wednesday at 4 p.m. That gave crews a chance to beat back the flames, which have been burning since Oct. 23, likely sparked by a Pacific Gas & Electric transmission tower with broken wires near Geyersville, in the heart of wine country.

Since then, the fire has pushed into three counties: Sonoma, County and Lake.

Still, despite the evacuation orders and PG&E power outages that have affected more than 2 million people since Saturday, the damage from this fire is a far cry from last year's Camp Fire, the most devastating fire in California history.

The Kincade Fire destroyed 349 structures, including 165 homes. But the Camp Fire in Paradise, Calif. destroyed more than 18,800 structures.

No one died during the Kincade Fire and four firefighters were injured.

In the Camp Fire, 85 people lost their lives.

Cal Fire crews expect to gain full control of the fire by Nov. 7.