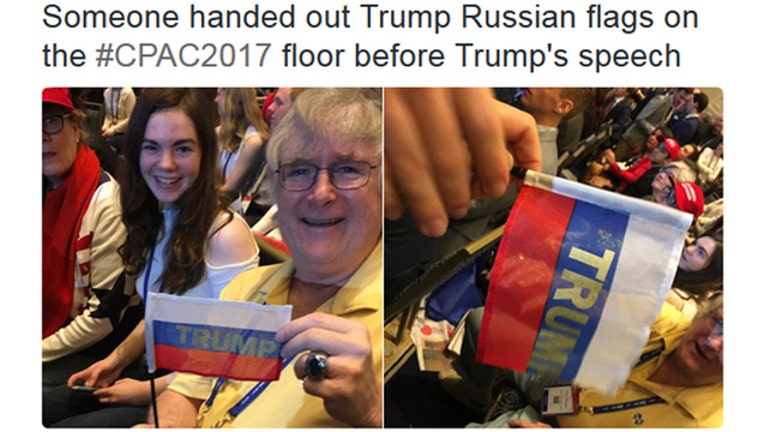 Russian flags with “TRUMP” stamped in gold were distributed and then quickly taken up during President Trump’s speech at the Conservative Political Action Conference.

It’s not known who handed out the flags or how they got into the hands of people at the conference, but attendees began waving them during Friday morning’s event. The Daily Mail reported that a liberal activist somehow got into the room and handed them out to attendees.

Snapchat reporter Peter Hamby noticed the audience waving the Russian flags and took photos just before staff members began to rush around the room and take them away.

The Hill reported that organizers told attendees anyone caught waving the flags would be thrown out.

The Trump campaign and administration has been dogged by links to Russia. Russian hackers, according to U.S. intelligence, became involved in the 2016 election to help Trump win.

Trump’s first National Security Advisor, Michael Flynn, was forced to resign after it became public he had discussions with Russian officials.

On Friday the White House admitted it discussed with the FBI news reports about the Trump-Russia connection. It however denied that White House Chief of Staff Reince Priebus asked the FBI to help shoot down stories about contact with Russia.