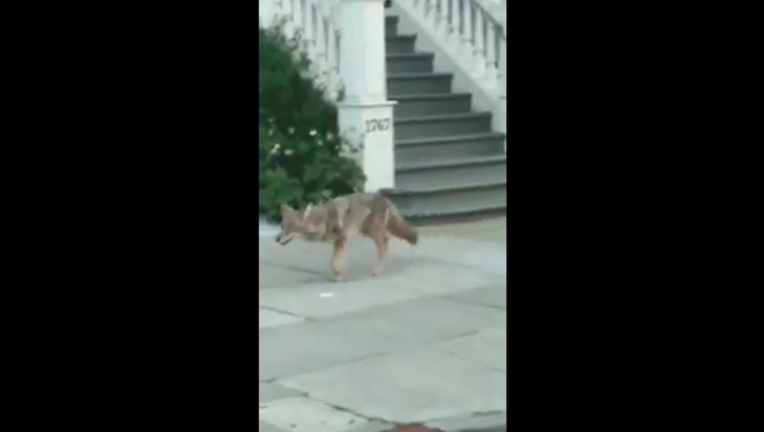 SAN FRANCISCO (KTVU) - Is it some kind of foreshadowing? Nature's version of symbolism? Whatever it is, the coyote lurking down Green Street in San Francisco's Cow Hollow Thursday evening appeared to freak out a couple of small dogs being walked by a human as the species crossed paths.

Mike Goldeen, @TheMG415 , shared this video with KTVU during the golden hour of what appeared to be a coyote, perhaps with a bit of a limp, boldly walking down the sidewalk in between Gough and Octavia streets. He simply wrote, "Just your average coyote strolling down green street."

The video is brief at less than 20 seconds, but the creature, known for its crafty intelligence and stealth made its presence known. Goldeen appears to be taking the video from the vantage point of a vehicle and at one point, a voice on the video can be heard, likely mistakenly, declaring, "wolf."

Like real coyotes, mythological coyotes are usually notable for their crafty intelligence, stealth, and voracious appetite. A website called Native Languages [dot org] says in some Native American coyote myths, the coyote is a revered culture hero who creates, teaches, and helps humans; but other interpretations claim they are sort of an antihero who demonstrates the dangers of negative behaviors like greed, recklessness, and arrogance (see Wile E. Coyote of Looney Tunes Fame).

Other belief systems say coyotes as totem animals belong to those who can see humor in the darkest of times, or when it's time to bring laughter back into your life. It's no wonder one appeared in the middle of San Francisco! Well, that is if you believe in that sort of thing.

For more shenanigans check out What is my Spirit Animal.com