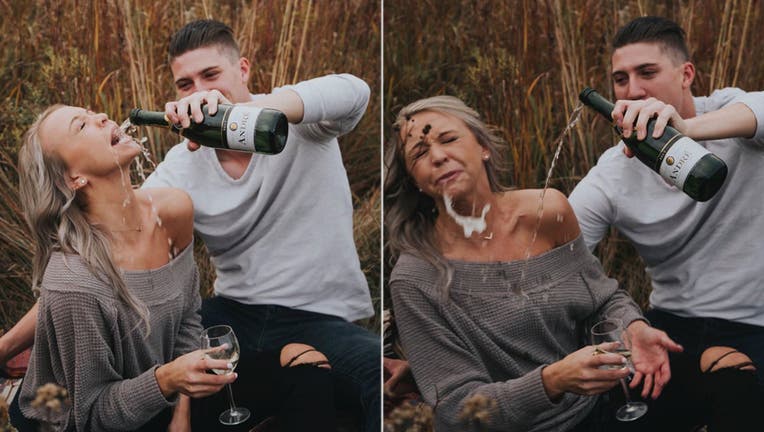 The couple starting making the rounds on social media after sharing photos of a failed attempt to recreate a picture found on Pinterest. (Chandler Lefever / Saltwater Summit Photography)

FOX NEWS - Ah, yes, nothing more romantic than the age-old gesture of drowning your beloved in cheap sparkling wine.

A couple's engagement photos are going viral on social media after the two tried — and failed — to recreate an idea they found on Pinterest.

“So me and Alyssa took our engagement pictures yesterday. She found a Pinterest picture that she wanted to try and recreate,” fiancé Collin Hewett wrote in the tweet. “I botched it.”

As seen in the referenced photo, which Hewett also posted to Twitter, he and fiancée Alyssa Snodsmith were hoping to capture a happy moment in the great outdoors, showing Hewitt slowly pouring champagne into Snodsmith's mouth. But alongside that photo, Hewitt shared two pictures of their attempts to recreate the moment — and they don't look like nearly as happy a couple.

In one shot, Snodsmith is seen struggling as he seemingly tilts the bottle down too low and showers her – and her shirt – with Andre Brut California Champagne. In the follow-up photo, Snodsmith spits out the wine while he continues to pour.

Still, many social media users were quite taken by the couple’s engagement photoshoot, with some of them even trying their hand at the Instagram-worthy pose.

Others, though, were more focused on the type of wine the couple was using, which is listed as a “California Champagne.”

For those worried about the bride-to-be, don’t. In a follow-up tweet, Snodsmith revealed that she had not drowned from her significant other’s heavy-handed pour.