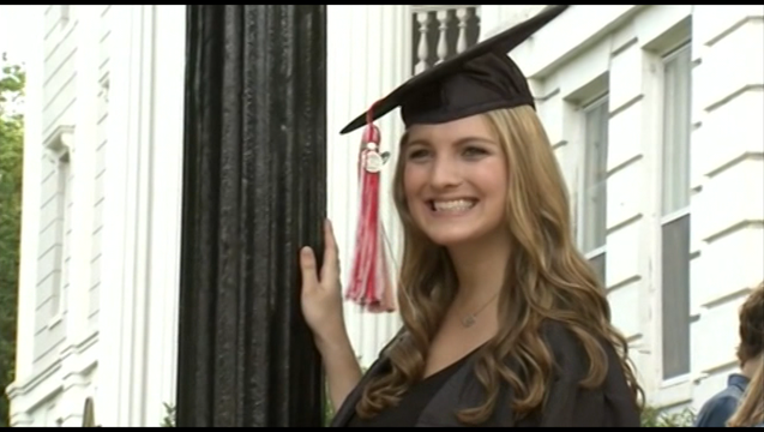 BOSTON (AP) — When colleges pick their graduation speakers, many strive to put a celebrity behind the podium. It can bring prestige. It can bring publicity. And it can bring a steep bill.

This year, for instance, the University of Houston paid $35,000 to book retired astronaut Scott Kelly as the commencement speaker. Rutgers University paid $35,000 for journalist Bill Moyers, who spoke at one division's ceremony after the schoolwide keynote speech from the unpaid President Barack Obama. Kean University in New Jersey paid $40,000 to each of its two speakers.

Their costs were detailed in documents obtained by The Associated Press through records requests. The AP asked 20 public universities with notable speakers to provide costs for their graduation speakers since last year, including speaking fees and travel expenses.

As many colleges struggle with tight budgets, some have drawn sharp criticism for paying hefty speaking fees. The University of Houston, which increased tuition this year, paid $166,000 to bring Matthew McConaughey to speak last spring, including $9,500 for his airfare. The University of Oklahoma paid $110,000 to book journalist Katie Couric in 2006. Both speakers donated their fees to charity, but their costs sparked a debate about whether colleges pay too much for pageantry.

"To the outside world, somebody giving a speech and getting paid $40,000 for one hour seems ridiculous," said Michael Frick, CEO of Speaking.com, a booking agency. "But in our industry, it's just capitalism and supply and demand."

Colleges that pay for celebrity speakers say they can impress donors and pique the interest of potential students. Plus, it's meant as a reward for the graduating class.

"Our students worked very hard, and they deserve it," said Margaret McCorry, a spokeswoman for Kean, a public university of about 14,000 students in Union, New Jersey. "It makes their commencement just that much more memorable."

Some universities have been paying their graduation speakers for at least 20 years, while others have started more recently. Rutgers first paid for a commencement speaker in 2011, when it spent $30,000 to bring author Toni Morrison.

"Rutgers University, like many institutions around the country, offers an honorarium to attract esteemed, high-caliber speakers — most of whom charge a fee," Greg Trevor, a Rutgers spokesman, said in a statement.

But some experts have noticed a reversal in the trend. In the past few years, the booking agency All American Entertainment has received fewer requests for paid graduation speakers, said Margo Sarlo, director of accounts. She attributes it to the backlash over fees paid by some colleges.

"Most universities are trying to offer an honorary degree, or they're requesting somebody to speak for free," she said. "They have to be careful about how much they spend."

Of the 20 universities that provided records about their costs, 16 said they didn't pay speaking fees this year.

Oddly, the wealthiest colleges rarely pay for speakers. At Ivy League schools, officials often draw from alumni, or use personal connections to bring famous figures. Out of 10 private universities also surveyed by the AP, seven said they don't pay speakers.

That included Harvard, which is bringing Steven Spielberg this year, and the Massachusetts Institute of Technology, where graduates will hear from Matt Damon, who portrayed a janitor at the school in "Good Will Hunting." Two universities didn't respond. Stanford says it pays a "very modest" fee, but wouldn't elaborate.

Most universities, though, cover at least travel and lodging for their speakers, costs that can add up quickly, according to school invoices from last year.

The University of Georgia spent $22,000 to charter a flight for ABC news anchor Amy Robach. The University of Texas at Austin paid a $3,300 hotel bill last year for Darren Walker, president of the Ford Foundation. The bill included two nights at a Four Seasons Hotel and $450 in charges from the hotel spa. The University of Wisconsin-Madison paid $3,100 for first class flights taking Katie Couric to and from New York.

Some colleges justify speaking costs by saying it comes from private money. That's the case at Rutgers. But some use public money supported by taxpayers. At Kean this year, $40,000 came from the school's general fund, and student groups raised another $40,000. It paid to bring two speakers: retired astronaut Mark Kelly (the twin brother of Houston's speaker Scott Kelly), and Brandon Stanton, a photographer and founder of the website Humans of New York.

Lawmakers in Illinois considered a bill last year that would have barred colleges from using public money on graduation speakers, although the proposal failed.

To avoid the dilemma entirely, Bradley University in Illinois abolished its annual graduation speech this year. President Gary Roberts said the decision was largely meant to save time, but also to cut travel expenses paid to speakers.

"I'm not going to use student tuition dollars to pay a person who's already pretty wealthy to come and pontificate," he said. "I can think of a lot of things to do with that kind of money that would be more valuable to our students."