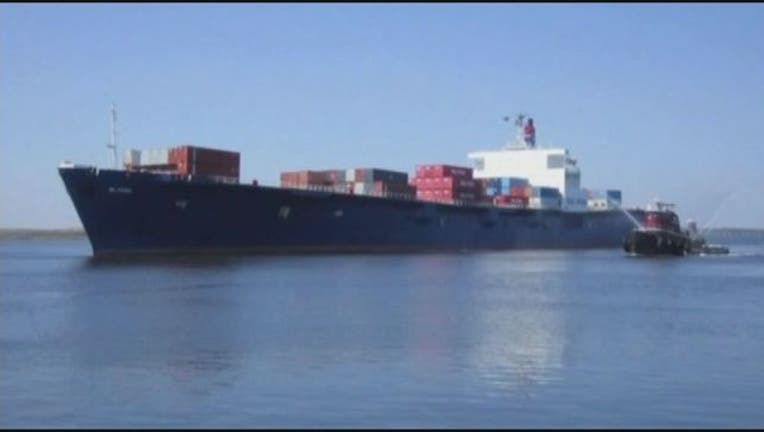 A Coast Guard report released Sunday says the primary cause of the 2015 sinking of the cargo ship El Faro, which killed all 33 aboard, was the captain underestimating the strength of a hurricane and overestimating the ship's strength.

The report said Capt. Michael Davidson should have changed the El Faro's route between Jacksonville, Florida, and San Juan, Puerto Rico, to avoid Hurricane Joaquin's 150 mph (240 kph) winds. When the 790-foot (240-meter) vessel got stuck he should have taken more aggressive measures to save it.

Speaking at a news conference in Jacksonville, Florida, Capt. Jason Neubauer also said the Coast Guard would have sought to revoke Davidson's license if he had survived.

Davidson "was ultimately responsible for the vessel, the crew and its safe navigation," said Neubauer, who chaired the investigation.

He said Davidson "misjudged the path of Hurricane Joaquin and overestimated the vessel's heavy weather survivability while also failing to take adequate precautions to monitor and prepare for heavy weather. During critical periods of navigation ... he failed to understand the severity of the situation, even when the watch standards warned him the hurricane was intensifying."

Davidson, 53, was recorded telling a crew member a few hours before the sinking, "There's nothing bad about this ride. I was sleepin' like a baby. This is every day in Alaska," where he had previously worked.

The report also says the ship's owner, TOTE Maritime Inc., had not replaced a safety officer, spreading out those duties among other managers, and had violated regulations regarding crew rest periods and working hours. The Coast Guard said it will seek civil actions against TOTE but no criminal penalties as there was no criminal intent.

TOTE Maritime released a statement Sunday saying the report "is another piece of this sacred obligation that everyone who works upon the sea must study and embrace. The report details industry practices which need change."

Voice recordings recovered from the ship show an increasingly panicked and stressed crew fighting to save the ship after it lost propulsion as they battled wind, shifting cargo and waves.

Davidson ordered the ship abandoned shortly before it sank but its open air lifeboats likely would have provided insufficient protection, the Coast Guard said. The agency said it would recommend that all ships now be equipped with modern enclosed lifeboats -- if the El Faro had such lifeboats, the crew may have survived, Neubauer said.

El Faro was one of two ships owned by TOTE Maritime Inc. that navigated in constant rotation on shipping runs between Jacksonville, Florida, and San Juan, Puerto Rico. It brought everything from milk to Mercedes Benzes to the island.

- A few weeks before the accident, TOTE stopped employing in port helpers who assisted its ships' crews to safely load cargo. The Coast Guard said the El Faro's crew had difficulty keeping up with the pace needed to get the ship out on schedule. A manager at the port took a photo of the El Faro the day before its final launch because unbalanced loading had caused it to lean heavily to one side, more than he had ever seen. He alerted stevedores, who added containers to the other side to rebalance the ship.

- When the El Faro departed Jacksonville the oil level in its main engine was below the manufacturer's recommendation although still within the range for operation. That became crucial when the El Faro began leaning in the storm as the oil level no longer reached the pump. That starved the engine, shutting it down. The loss of propulsion left the El Faro helpless against Joaquin and its waves.

- Four of the five Polish workers who had been temporarily assigned to the El Faro spoke little English and none of them had been briefed on safety procedures. The wife of one of the men told investigators "he had never seen or worked on a hulk like this" and that as he worked, rust would fall into his eyes.

- A weather prediction system that would have sent emailed updates about Joaquin to Davidson had not been activated.

- Less than six hours before the El Faro sank Second Mate Danielle Randolph, who was in charge of safety, was recorded telling another crew member that drills were not taken seriously. She added that crew members rarely try on their survival suits to make sure they fit. As the ship was going down and Davidson ordered the ship abandoned, Randolph was heard leaving the bridge to find life vests either because none were stored there as required or she didn't know where they were.

- The National Hurricane Center should re-evaluate the effectiveness of its forecasts for storms that may not make landfall but may impact ships.

Writer Jason Dearen in Gainesville, Florida, contributed to this report.