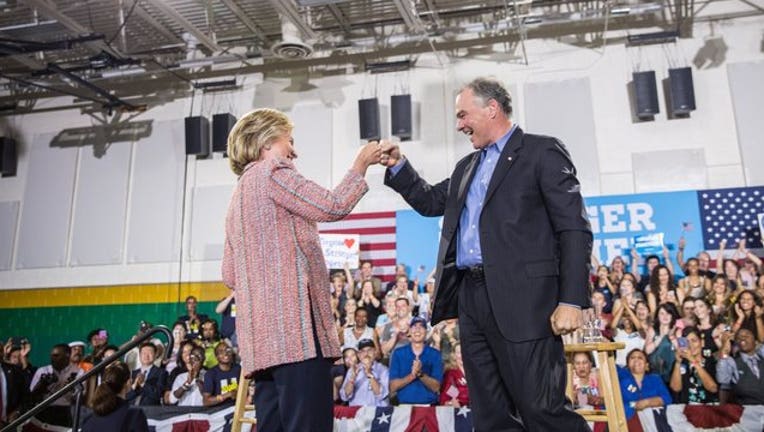 The Democratic National Convention opening Monday in Philadelphia is Clinton's chance to hit reset after a vigorous primary against Bernie Sanders and the unlikely movement that formed behind the Vermont senator.

Sanders, a self-described democratic socialist, has endorsed Clinton, but many of his supporters have not. Some of them were dismayed by her choice of Sen. Tim Kaine, D-Va., as her running mate.

Last week's Republican National Convention in Cleveland exposed deep, lingering reservations about Donald Trump from within his own party. The Democratic gathering is expected to be a more smoothly choreographed display of unity among Clinton, Sanders and Democratic lawmakers and voters.

What to know about the week:

Both parties use their national conventions to formally nominate candidates for president and vice president. Party leaders showcase their nominees, and the prime-time speeches by the candidates and prominent politicians win some of the largest television audiences of the campaign. That makes the convention a critical opportunity for a party to introduce its candidates to the country.

Democrats also will adopt its platform, which lays out policy principles but has no binding effect.

The Wells Fargo Center, home to the NHL's Philadelphia Flyers and the NBA's Philadelphia 76ers, is the convention site. The arena has been transformed with stages, platforms, cameras and lights. Democrats are hoping that city's historical role in the founding of American democracy will serve as a powerful backdrop for the themes they'll highlight.

More than 5,000 delegates are among the 50,000 people set to be in Philadelphia. They include alternates, lawmakers, special guests, journalists and protesters. Among the delegates, about 15 percent are superdelegates, mainly members of Congress and members of the Democratic National Committee.

At the GOP convention, a striking number of prominent Republican lawmakers and party leaders were nowhere to be seen, including the party's previous two presidents and its two most recent presidential nominees. In contrast, bold-name Democrats have been eagerly vying for a chance to speak in Philadelphia. Most Democratic senators and House members are expected to attend.

First lady Michelle Obama is set to speak Monday. That's also when Sanders will give his speech — a closely watched moment for signs of whether his loyal supporters will line up behind Clinton, as he's asked them to do.

On Thursday, the final night, Chelsea Clinton will introduce her mother for her speech accepting the Democratic nomination.

Kaine, who made his debut as Clinton's running mate at a joint appearance Saturday, will give a speech introducing himself to the country. Officials haven't yet said when, but the running mate typically speaks Wednesday.

Snoop Dogg, Lady Gaga, Lenny Kravitz and Cyndi Lauper will appear in Philadelphia during the convention. Fergie will perform at The Creative Coalition's gala.

States will get a chance to announce how their delegates are voting in the formal roll call Tuesday. It's a high point for Sanders delegates; they're pushing to have their votes fully tallied.

In 2008, Clinton halted the roll call midway through to call for then-Sen. Barack Obama's approval by acclamation, or unanimous vote. Sanders says he favors a state-by-state roll call, but he hasn't indicated exactly what he will do.

Clinton arrives in Philadelphia with 2,814 delegates to Sanders' 1,893, according to an Associated Press count. That includes the superdelegates, who can vote for any candidate they choose. This year, those superdelegates overwhelmingly backed Clinton. The remaining 4,051 are pledged delegates, won by the candidates based on the results of state primaries and caucuses.

If there are any fireworks in Philadelphia, expect them to come from Sanders supporters. They have said they plan to show up in full force.

Philadelphia officials estimate between 35,000 and 50,000 people will demonstrate across the city each day. Activists have put the estimate higher, at roughly 100,000.

Among the groups planning to demonstrate are gun control advocates, the group Occupy DNC Convention and Trump supporters from Pennsylvania.