What is Roe v. Wade? US Supreme Court decision, explained

DALLAS - Justice Clarence Thomas says the Supreme Court has been changed by the shocking leak of a draft opinion earlier this month. The opinion suggests the court is poised to overturn the right to an abortion recognized nearly 50 years ago in Roe v. Wade.

The conservative Thomas, who joined the court in 1991 and has long called for Roe v. Wade to be overturned, described the leak as an unthinkable breach of trust.

"When you lose that trust, especially in the institution that I'm in, it changes the institution fundamentally. You begin to look over your shoulder. It's like kind of an infidelity that you can explain it, but you can't undo it," he said while speaking at a conference Friday evening in Dallas.

The court has said the draft does not represent the final position of any of the court’s members, and Chief Justice John Roberts has ordered an investigation into the leak. 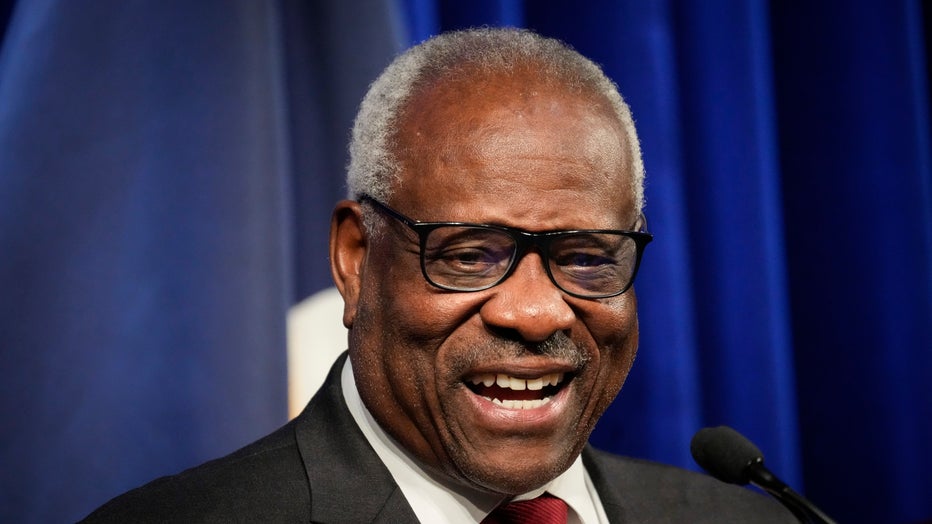 Thomas, a nominee of President George H.W. Bush, said it was beyond "anyone's imagination" before the May 2 leak of the opinion to Politico that even a line of a draft opinion would be released in advance, much less an entire draft that runs nearly 100 pages. Politico has also reported that in addition to Thomas, conservative justices Neil Gorsuch, Brett Kavanaugh and Amy Coney Barrett had voted with the draft opinion's author, Samuel Alito, to overrule Roe v. Wade and a 1992 decision, Planned Parenthood v. Casey, that affirmed Roe’s finding of a constitutional right to abortion.

RELATED: House holds hearing on Supreme Court ethics, amid calls for Justice Thomas to be impeached

Thomas said that previously, "if someone said that one line of one opinion" would be leaked, the response would have been: "Oh, that’s impossible. No one would ever do that."

"Now that trust or that belief is gone forever," Thomas said at the Old Parkland Conference, which describes itself as a conference "to discuss alternative proven approaches to tackling the challenges facing Black Americans today."

Thomas also said at one point: "I do think that what happened at the court is tremendously bad...I wonder how long we're going to have these institutions at the rate we're undermining them."

Thomas also touched in passing on the protests by liberals at conservative justices' homes in Maryland and Virginia that followed the draft opinion's release. Thomas argued that conservatives have never acted that way.

"You would never visit Supreme Court justices' houses when things didn’t go our way. We didn’t throw temper tantrums. I think it is ... incumbent on us to always act appropriately and not to repay tit for tat," he said.

Protests at the Supreme Court and around the nation were planned for Saturday.

Abortion marches are planned across the US today.

Neither Thomas nor any of the attendees at the Dallas session made mention of the Jan. 6 insurrection or the actions of Thomas' wife, Virginia, in fighting to have the results of the 2020 presidential election overturned.

Clarence Thomas was speaking before an audience as part of a conversation with John Yoo, who is now a Berkeley Law professor but worked for Thomas for a year in the early 1990s as a law clerk. 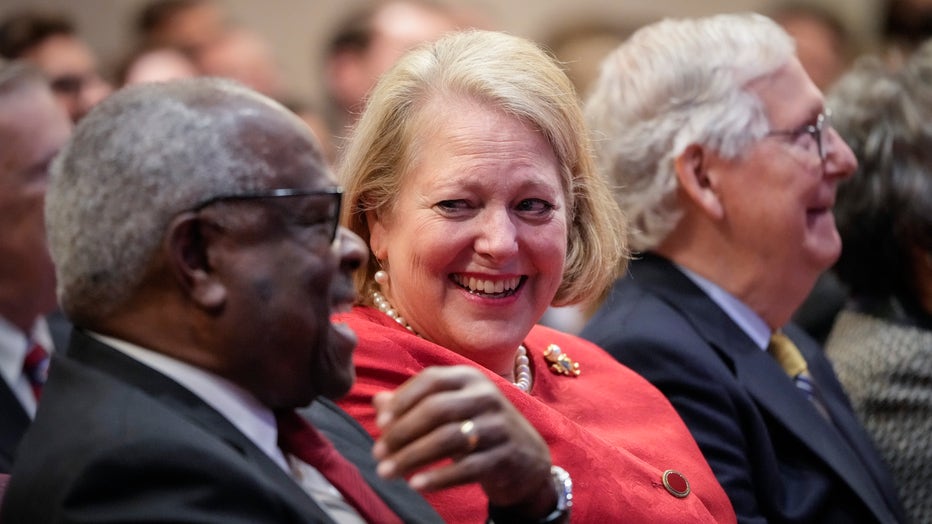 WASHINGTON, DC - OCTOBER 21: (L-R) Associate Supreme Court Justice Clarence Thomas sits with his wife and conservative activist Virginia Thomas while he waits to speak at the Heritage Foundation on October 21, 2021 in Washington, DC. (Photo by Drew A

Each justice generally has four law clerks every year and the current group of law clerks has been a focus of speculation as a possible source of the draft opinion's leak. They are one of a few groups along with the justices and some administrative staff that has access to draft opinions.

Thomas also answered a few questions from the audience, including one from a man who asked about the friendships between liberal and conservative justices on the court, such as a well-known friendship between the late liberal Justice Ruth Bader Ginsburg and the late conservative Justice Antonin Scalia. "How can we foster that same type of relationship within Congress and within the general population?" the man asked.

"Well, I'm just worried about keeping it at the court now," Thomas responded. He went on to speak in glowing terms about former colleagues. "This is not the court of that era," he said.

Despite his comments, Thomas seemed in good spirits — laughing heartily at times. Yoo, who is known for writing the so-called "torture memos" that the George W. Bush administration used to justify using "enhanced interrogation" techniques after the Sept. 11 terror attacks, said at one point that he had taken pictures of notes Thomas had taken during the conference.

"You're going to leak them?" Thomas asked, laughing.

Yoo responded: "Well, I know where to go...Politico will publish anything I give them now."