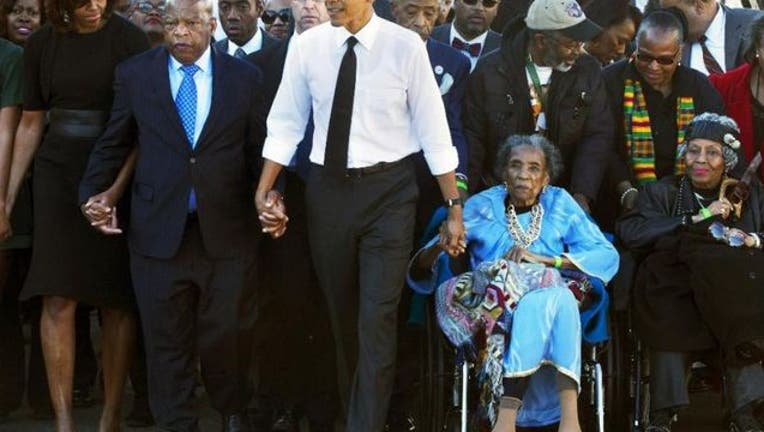 Boynton Robinson was among those beaten during the march across the Edmund Pettus Bridge in Selma, Alabama, in March 1965 that became known as "Bloody Sunday." State troopers teargased and clubbed marchers as they tried crossing the bridge. A newspaper photo featuring an unconscious Boynton Robinson drew wide attention to the movement.

"The truth of it is that was her entire life. That's what she was completely taken with," Bruce Boynton said of his mother's role in shaping the civil rights movement. "She was a loving person, very supportive — but civil rights was her life."

Fifty years after "Bloody Sunday," Barack Obama, the first black president of the United States, held her hand as she was pushed across the bridge in a wheelchair during a commemoration.

"She was as strong, as hopeful, and as indomitable of spirit — as quintessentially American — as I'm sure she was that day 50 years ago," Obama said Wednesday in a written statement. "To honor the legacy of an American hero like Amelia Boynton requires only that we follow her example — that all of us fight to protect everyone's right to vote."

Boynton Robinson, hospitalized in July after a stroke, turned 104 on Aug. 18. Her family said in a written statement that she was surrounded by loved ones when she died around 2:20 a.m. at a Montgomery, Alabama hospital.

In January, Boynton Robinson attended the State of the Union address as a special guest of Rep. Terri Sewell, D-Alabama, who said Boynton Robinson's 1964 run for Congress paved the way for her as Alabama's first elected black congresswoman. Boynton was the first black woman to run for Congress in the state and the first Alabama woman to run as a Democrat, according to the Encyclopedia of Alabama.

Sewell said in January that Boynton refused to be intimidated and ultimately saw the impact of her work when the Voting Rights Act of 1965 was signed into law. Boynton Robinson was invited as a guest of honor to attend the signing by President Lyndon B. Johnson.

Lewis, D-Georgia, called Boynton Robinson fearless and said in a written statement that she was one of the civil rights movement's most dependable and tireless leaders.

The Rev. C.T. Vivian worked closely with King and said he knew Boynton Robinson when she lived in Selma. Through fighting for voting rights, she and others were fighting for the right to be considered fully American at a time when black people were still being denied basic freedoms, Vivian said.

"You just don't know how cruel, how non-thinking, how devilish, how hateful people could be. Just to hear this brings it all out for me," Vivian said. "It just hurts."

SCLC President and CEO Charles Steele said in a written statement that Boynton Robinson was "the straw that stirred the drink," and compared her legacy in Selma to that of Rosa Parks in Montgomery.

"Her leadership and her courage sparked and sustained a movement that has transformed not just the South, but the entire country," Southern Poverty Law Center CEO Richard Cohen said in a written statement, adding that the nation owes her a debt of gratitude.

Boynton Robinson, born in Savannah, Georgia, worked as an educator there and with the U.S. Department of Agriculture in Selma. Tuskegee University officials have said she graduated from the school in 1927 and donated much of her personal memorabilia from the 1950s and 1960s to the university.

Boynton said his family is planning events in his mother's honor in Tuskegee and Selma, and is also arranging a ceremony at the Edmund Pettus Bridge on Sept. 8.