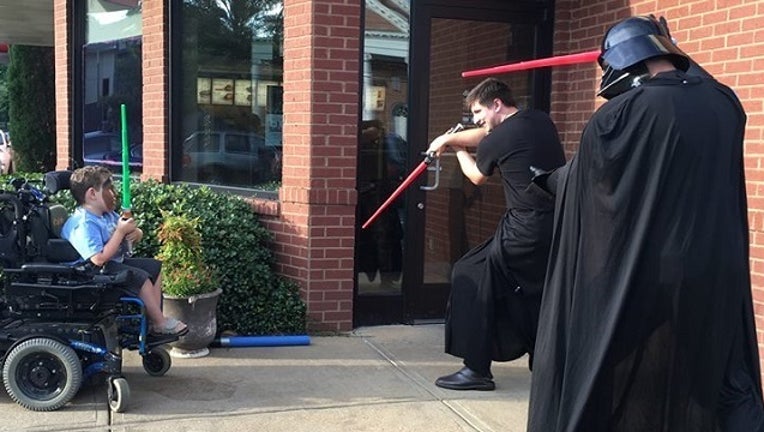 COLUMBUS, Ga. - It is Sunday in Atlanta, the home of the original Chick-fil-A. This is sad news because Chick-fil-A restaurants are closed Sundays. If they were open, they might be making more headlines like this one.

This past Friday, a Chick-fil-A in Columbus was hosting a “Galaxy Night.” It was a special night for families to come together, light sabers in tow, with stories of the force and light-hearted duels, amid the usual fares offered by the Atlanta-based establishment. All the notable dignitaries were in attendance: Princess Leia, Darth Vader, Kylo Ren and more.

Also in attendance was Kari Wood Merriken and her son. Now, to some, her son may not look like the typical warrior, but the employees at this Chick-fil-A know a Jedi in the making when they see one. (Yoda have you seen?) She posted their story on the restaurant’s Facebook page with a photo:

“Every time I come to this Chick-fil-A, I am so impressed. The employees are always friendly and courteous. Galaxy Night was so much fun! On top of it, the employees turned a negative experience around for us. When my son asked some boys in the play area if he could join them, the response was, "no, we're good." He asked me to play with him, so I explained the situation to an employee and asked to borrow a light saber so we could duel. I went outside with him, and the next thing I know, the employees had found some worthy opponents who were much cooler (and more skilled with a light saber) than mom.😉 Thank you Chick-fil-A and characters!”

The restaurant replied back in part, “Glad our team and these "visitors" from another galaxy could make your son's night memorable!”

We can’t help but think that the force is strong with them!