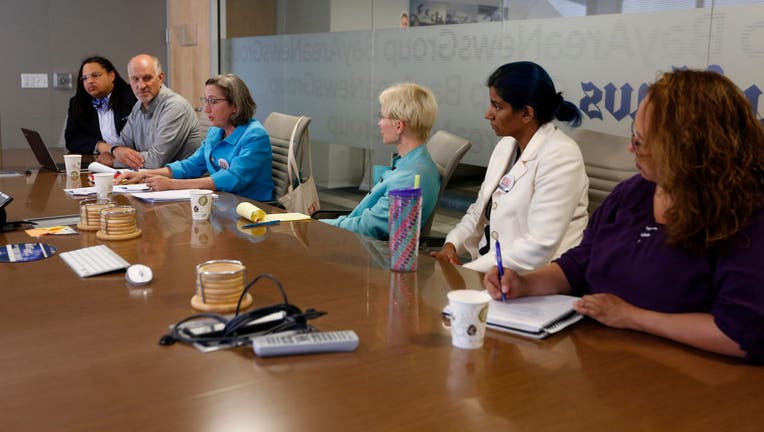 SAN JOSE, CA - APRIL 19: A group leading the effort in the recall of Santa Clara County Superior Court judge Aaron Persky, including Stanford sociology professor Michelle Dauber, center, speaks with the editorial board of the Mercury News at the Merc

SACRAMENTO, Calif. - California would end what lawmakers called an archaic distinction between spousal rape and other forms of sexual assault under identical bills backed by proponents on Monday.

While there is no difference in the maximum penalties, those convicted of spousal rape currently can be eligible for probation instead of prison or jail.

They also may not have to register as a sex offender. Anyone convicted of rape is required to register, but those convicted of spousal rape must register only under certain circumstances such as if the spouse was sentenced to state prison.

"The exact same act by a spouse is treated less punitively" under California law, said Assemblywoman Cristina Garcia, who is carrying one of the bills. "Rape is rape, regardless of marital status."

California is one of 11 states that still distinguish between spousal rape and rape, after Minnesota most recently eliminated the exception in 2019, according to proponents.

The distinction dates from the days when women were expected to obey their husbands and was "based on the idea that men have a property right of sexual access to the bodies of their wives," said Stanford University law professor and sociologist Michele Dauber.

"Historically, men could rape their wives with impunity," Dauber said. It wasn’t until 1979 that a husband was first prosecuted in the United States for raping his wife, she said. Though all states have since made spousal rape illegal, some including California still "treat it as a far less serious crime."

The traumatic effect on the victim is the same no matter their marital status, California NOW president Kolieka Siegle said in backing the bills.

Until 1975, all states had laws similar to California’s, said state Sen. Dave Cortese, Garcia’s fellow Democrat who is carrying an identical measure.

Both bills would end the spousal rape exception in the state’s criminal code, so the rape of a spouse would be treated and punished the same as the rape of a non-spouse.

Just under 10% of reported rapes in California are spousal rape cases, Rosen said, though "we know these crimes are way underreported."

The distinction is particularly antiquated now that many people live together without ever marrying, Rosen said: "It is inherently unfair to allow marital status to be an escape hatch for accountability for rape."

The bills were also backed by another member of the reform-minded Prosecutors Alliance of California, San Francisco District Attorney Chesa Boudin.