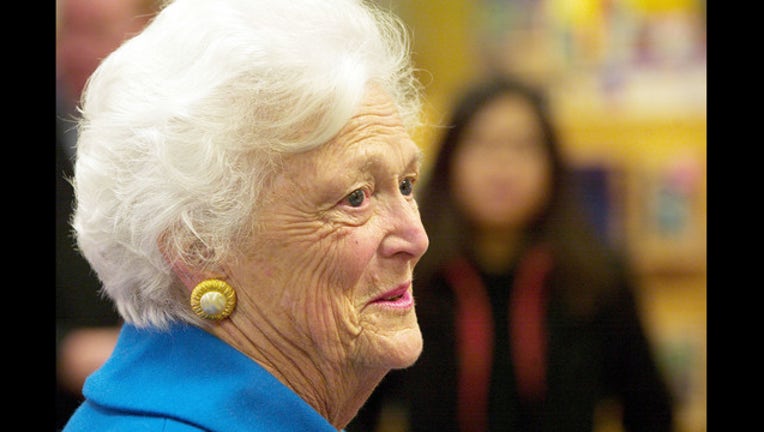 AUSTIN (AP) - On a hot summer day in 1978, as her husband mulled his first presidential run, Barbara Bush headed to Houston's leafy Memorial Park for a jog while she thought about what issues she'd like to focus on should she become first lady.

Bush was concerned about stubborn societal problems like crime, the homeless, drugs and hunger. But as she ran, the then-53-year-old came to the realization that teaching more people to read could help decrease the other major problems, which can grow out of lack of literacy and educational opportunity.

"After much thought, I realized everything I worried about would be better if more people could read, write and comprehend," Bush wrote in her 1994 autobiography, "Barbara Bush: A Memoir."

It would be another decade before Bush became first lady, but, in the interval, she was active in literacy programs. In March 1989, mere weeks into her husband's presidency, she founded the Barbara Bush Foundation for Family Literacy.

"We love that story," said Lauren Sproull, the foundation's spokeswoman. "It really shows that, from the very beginning, the moment she even thought that she might become first lady one day, she immediately turned her thoughts to, 'How can I do the most good?' 'How can I help the most people?'"

The foundation has since raised more than $110 million to create or support literacy programs for men, women and children in all 50 states. Its programs include classes to help teenage mothers who left high school earn GED diplomas in Georgia, and teaching non-English speakers in Alabama the language and how to transfer what they learn to their pre-kindergarten-age children before they start school.

One in four American adults can't read above a fifth-grade level, the foundation says. A 2003 study by the National Center for Education Statistics found that nearly 15 percent of Americans lacked basic reading and comprehension skills. It took more than a decade to compile, though, and hasn't been repeated.

For years, the foundation offered grants to fund new literacy programs or bolster existing ones, but since 2012 has focused on creating direct models that use technology to reach adults and children, many of whom weren't always able to attend traditional, classroom-style programs.

The foundation says it has helped "easily hundreds of thousands" of people across the country over the years, but doesn't have a full count of everyone enrolled in programs it supported.

Bush died Tuesday at her Houston home at the age of 92. To mark her 90th birthday in June 2015, the foundation launched the $7 million adult literacy XPRIZE, a competition in which teams are tasked with creating mobile apps that can improve adult literacy within 12 months. The foundation has announced eight semifinalists whose apps are being field-tested among about 11,000 people in Dallas, Philadelphia and Los Angeles.

Bush remained active with the foundation until as recently as two months ago, participating via video chat at one of its reading events. Her daughter, Doro Bush Koch, is now the foundation's honorary chairwoman, and it is based in Tallahassee, where her son, Jeb, lived as Florida governor from 1999 until 2007.

Bush also wrote two books about her dogs' lives, 1984's "C. Fred's Story" and "Millie's Book," in 1990, and donated the proceeds to family literacy programs. In 2013, her son Neil, and his wife Maria, created the Barbara Bush Houston Literacy Foundation, which promotes literacy among people of all ages in the country's fourth-largest city.

Laura Bush, who was first lady while Barbara's son George W. was president, told Fox Business Network on Wednesday that her mother-in-law believed "if everyone could read and write, a lot of problems would be solved."