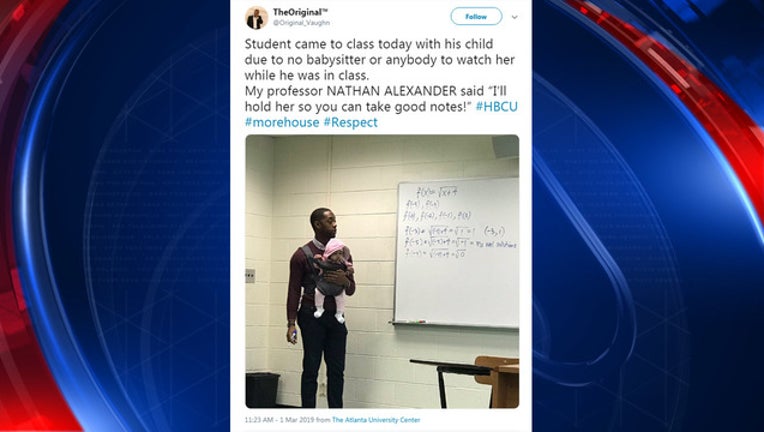 ATLANTA (FOX 5 Atlanta) - A photo of an Atlanta area professor's small act to help a student in class has gone viral online.

On Friday, Twitter user @Original_Vaughn shared a photo of his Morehouse College professor teaching a class at the Atlanta University Center.

It looks like a normal class, except Professor Nathan Alexander is carrying a baby while he teaches.

According to the original tweet, a student came to the class with the baby girl because he didn't have a babysitter or anyone else to watch her when class was supposed to be in session.

Professor Alexander told him that he'd hold the baby, "so you can take good notes."

The professor replied to the tweet, thanking it and saying he "appreciated the love."

Since the tweet was posted it has received nearly 50,000 retweets, with people around the world saying how inspiring this simple act of kindness way.

According to his website, Alexander is the James King Jr. Institute visiting professor and associate director of Communicating TEAMs (Communicating by Thinking Effectively in and About Mathematics) at Morehouse College, as well as the Georgia director of a STEM teaching fellowship that is funded by the Woodrow Wilson and Woodruff Foundations.