ATLANTA - A late-night road rage incident in Atlanta ends as a police shooting. Atlanta officers open fire on a suspect, who they say pulled a gun on a woman. Neither the suspect nor any officers ended up getting hurt.

Police tell FOX 5 that 34-year-old Tiara Gilliam was driving to work around 10:30 Tuesday night as she turned left off of Boulevard on to Ponce De Leon Avenue, she came upon a man who was outside of his car.  The woman blew her horn at the man, upsetting him. Police say the man got in his vehicle and backed into the woman's car, before taking off.

The woman called 911 and continued to work.  She eventually pulled into the Krispy Kreme on Ponce, to where police say the man, later identified as 31-year-old Jacob Peter Horn, followed her.  Horn allegedly jumped out of his car and ran towards her with a handgun. The woman then fled, flagging down an officer working an off-duty job, who was joined by an officer responding to her 911 call.

As the woman was telling police about what happened, the suspect allegedly ran to the nearby Nancy's Pizza and tried to kick in its door. Officers confronted the man as he was walking against traffic on Ponce. He then took off running. 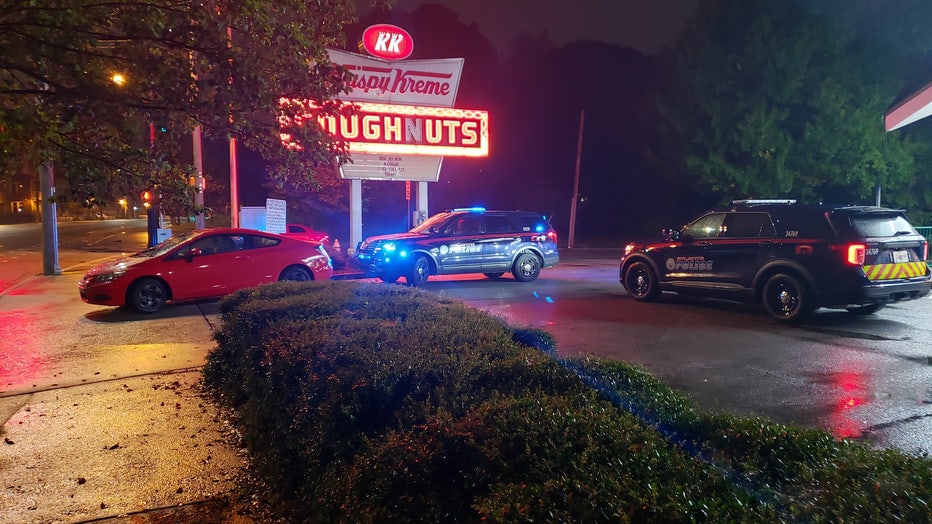 Police caught up to him in the 700 block of Penn Avenue.  The officers say Horn suddenly reached into his pocket, pulled his hand out, and pointed at the officer, leading them to believe he was armed. One of the officers then fired two shots, missing the suspect.

Horn  again tried to run, only to be chased by the officers and arrested when he tried to enter a private residence

Police didn't find a gun on Horn and say he likely ditched it during the pursuit.

Paramedics transported the suspect to Grady for evaluation. Police say his erratic behavior leads them to believe he was on some kind of substance.

Once released, officers say that Horn will be charged with aggravated assault and obstruction.

The officer is now under a formal internal investigation into the shots that were fired.