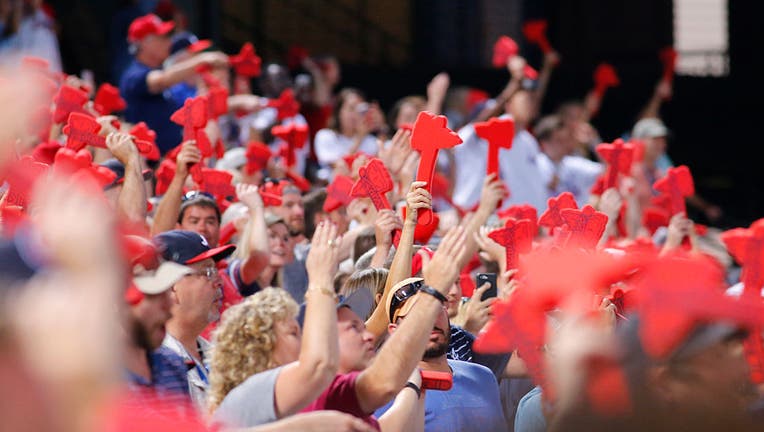 The fans do the famous "tomahawk chop" during an MLB game between the Atlanta Braves and the Detroit Tigers. (David J. Griffin/Icon Sportswire via Getty Images)

The Atlanta Braves announced on Sunday that the team won't be changing its name, but will review the tomahawk chop, a well-known sports celebration, according to a report.

In an email to season-ticket holders on Sunday, the team said it wouldn't be following the Washington Redskins and Cleveland Indians in considering a name change. The team informed its fans that the Braves will remain the Braves amid recently renewed questions on whether the nickname was offensive to the Native American community.

"The Atlanta Braves honors, respects, and values the Native American community. As an organization, we have always drawn strength from our diversity and respect for everyone. That will never change," the team said in an email posted on Twitter by Paul Lukas from Uni Watch blog, according to ESPN.

The Braves said they've had a supportive relationship with the Native American community for many years.

"Last fall, we furthered this relationship and pledged to meet and listen to Native American and tribal leaders from many areas, including the Eastern Band of the Cherokees (EBCI) in North Carolina," the email continued. "As a result, we formed a cultural working relationship with the EBCI and have also formed a Native American Working Group with a diverse collection of other tribal leaders to collaborate on matters related to culture, education, outreach, and recognition on an on-going basis."

Due to those conversations, the team said changing the Braves name "is not under consideration or deemed necessary."

"We have great respect and reverence for our name and the Native American communities that have held meaningful relationships with us do as well. We will always be the Atlanta Braves," according to the email.

The team's tomahawk chop is under review. The gesture was popularized by Deion Sanders when he joined the team in the 1990s after he played for the Florida State Seminoles. The team said the chop "continues to inspire our players on the field," but management is still looking into the gesture.

"As it relates to the fan experience, including the chop, it is one of the many issues that we are working through with the advisory group," the email said. "With that in mind, we are continuing to listen to the Native American community, as well as our fans, players, and alumni to ensure we are making an informed decision on this part of our fan experience."

Both the Redskins and Indians have been reportedly considering changing their names, with the D.C. based NFL team expected to retire the longtime nickname on Monday, according to a report by Ben Fischer of the Sports Business Journal.

Meanwhile, the Indians tweeted on July 3 that they are "committed to engaging our community and appropriate stakeholders to determine the best path forward with regard to our team name."