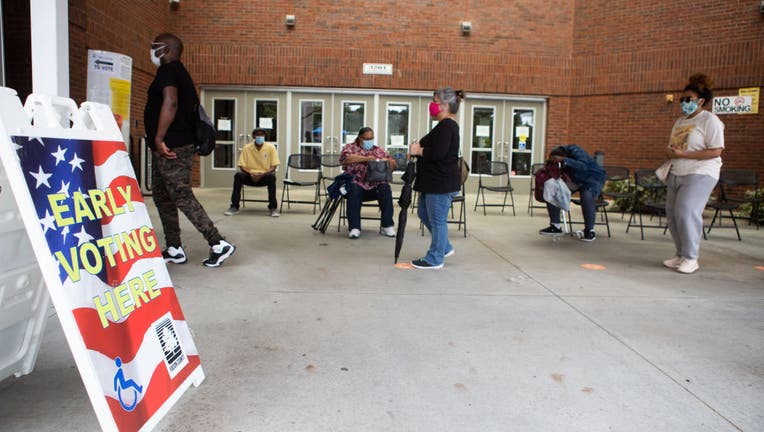 People stand in line on the first day of early voting for the general election in Atlanta.

ATLANTA -  A federal appeals court on Saturday temporarily halted a lower court’s order that said every polling place in Georgia must have at least one updated paper backup of the electronic pollbooks that are used to check in voters.

U.S. District Judge Amy Totenberg last month issued the order requiring the backup and other measures amid the context of a broader lawsuit filed by voting integrity activists that challenges Georgia’s voting system. She called the order “a limited common sense remedy” to impediments voters have faced.

The state appealed the order to the 11th U.S. Circuit Court of Appeals. A three-judge panel of the appeals court voted 2-1 to stay Totenberg’s order while the appeal is pending.

The voting integrity activists had asked Totenberg to order the paper backup. They had argued that malfunctioning electronic pollbooks created bottlenecks that resulted in voters waiting in long lines during the state’s primary election in June and runoff election in August.

The KnowInk PollPads are part of the new election system the state bought last year from Dominion Voting Systems for more than $100 million.

Totenberg’s ruling required Georgia Secretary of State Brad Raffensperger, the state’s top elections official, to generate and provide election superintendents in each county a list of electors updated at the close of the in-person early voting period to contain all the information in the electronic pollbook. The secretary of state was then to instruct the election superintendents to provide at least one paper backup at each polling place on Election Day.

The paper backups were to be used to determine voter eligibility and precinct assignment in the case of equipment malfunction or other emergency, Totenberg wrote. She also ordered that efforts be made to ensure that county election officials and poll workers are trained on using paper pollbook backups and emergency ballots and that a sufficient stock of emergency paper ballots be maintained.

Circuit Judges Barbara Lagoa and Andrew Brasher voted to stay Totenberg’s order. The two-paragraph appeals court ruling says Circuit Judge Adalberto Jordan dissented in part and would not have stayed the requirement for the state to provide county election officials with an updated pollbook that can be printed and the requirement that county election officials provide that paper backup to each polling place to be used in case of equipment malfunction or emergency.

“We thank the 11th Circuit for recognizing that, with record turnout and the difficulties of conducing an election during a pandemic, local election officials have enough on their plates without last minute additions from federal judges,” Raffensperger said.

Robert McGuire a lawyer for the Coalition for Good Governance and individual voters — who had requested the paper pollbook backups as plaintiffs in the lawsuit — noted that the judges in the majority didn’t give a reason for granting the stay.

“Unfortunately, that means we are left to guess why two of the appellate judges felt that voters will be harmed by the common-sense protection of having a paper pollbook backup to guard against power outages and equipment malfunctions on Election Day,” he said. “Murphy’s law says Georgia voters will soon find out why the trial court judge found that simple protection should be in place.”

The broader lawsuit challenges Georgia’s election system, saying it is unaccountable and unverifiable and has serious security vulnerabilities. The activists want Totenberg to order the state to scrap its new touchscreen ballot-marking machines in favor of hand-marked paper ballots.

Totenberg said in a ruling earlier this month that she has serious concerns about the election system, but she declined to order a switch to hand-marked paper ballots for November. A change so close to the election “cannot but cause voter confusion and some real measure of electoral disruption,” she wrote.