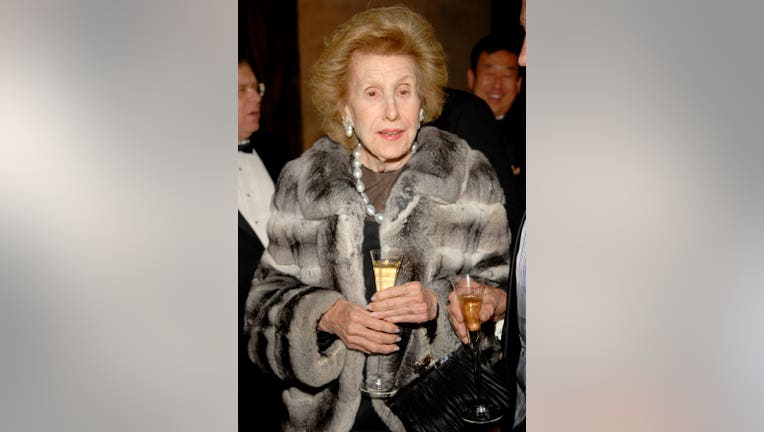 ATLANTA - Anne Cox Chambers, a newspaper heiress, diplomat and philanthropist who was one of the country's richest women, has died at the age of 100.

“Aunt Anne was a wonderful, kind and elegant lady who cared deeply about her family, her company and her country,” said nephew James Cox Kennedy, who served as Cox Enterprises chief executive officer from 1988 to 2008 and continues as chairman. “She took the responsibility of good fortune very seriously and gave back to the best of her ability to the many causes she cared about.”

Chambers, a director of Cox Enterprises Inc., promoted Jimmy Carter's political career and served as U.S. ambassador to Belgium during his presidency.

Forbes estimated her net worth several years ago at nearly $17 billion. She was well known for her charitable giving, and served on the boards of the Atlanta Arts Alliance and the High Museum of Art among other institutions.

She was the daughter of James Middleton Cox, the 1920 Democratic presidential candidate and founder of Cox Enterprises Inc. The privately held company has included The Atlanta Journal-Constitution and other newspapers, radio and TV stations, cable TV systems and other businesses.

Chambers and her mother and siblings inherited the company when the senior Cox died in 1957.

One of the country's wealthiest woman has died

She owned a white-columned manor across from the governor's mansion in Atlanta, where Jimmy Carter would bring his daughter Amy over to swim in the pool. She also had an estate in France and a posh apartment in New York.

But while most of her wealthy friends were Republicans, she remained a staunch Democrat. At 89, she even knocked on doors for Barack Obama’s 2008 presidential campaign, the newspaper reported.

"I just don't discuss politics with my friends. No use having fights," she once told Vanity Fair magazine.

"Both of my parents were extremely caring people, so that I think growing up, well, there was the fact of feeling responsible," she said. "My father's rich friends would complain about paying taxes, but he used to say it was a privilege to pay taxes. In Russia, you'd never make enough money to pay those taxes."

Chambers' support of Carter, who captured the Georgia governor's office with her help in 1970 and the presidency in 1976, won her an appointment as U.S. ambassador to Belgium in 1977.

"People all over had told me she wouldn't accept it," Carter recalled in a 1988 interview. "They said Anne didn't like to go to banquets, didn't like to meet large numbers of people and absolutely would not make a speech, even to just a few people. She was very timorous about public events."

There were also comments from critics who noted that Carter had vowed to pick professional diplomats to be his ambassadors.

But she did accept the job, joking later that she didn't realize her many conversations with Carter over the years "had been my interviews for an ambassador's post." She called the appointment "the greatest honor and privilege of my life."

Carter and his wife Rosalynn expressed condolences in a statement on Friday, saying "Ambassador Chambers was an important part of our lives for over six decades.

“Her life serves as a path for fairness and equality for everyone and especially for women and girls. Atlanta, our State of Georgia, and the world has lost a wonderful woman, business leader, and philanthropist."

After returning to the United States when Carter left office in 1981, she continued to be a major donor to the Democratic National Committee and individual Democratic candidates. She also bought an estate in Provence, and was awarded the French Legion of Honor.

James M. Cox Sr. had begun the family business in 1898 when he purchased the Dayton Daily News in Dayton, Ohio. He also was a three-time Ohio governor and a congressman. In 1920, he became the Democratic nominee for president - Franklin Delano Roosevelt was his running mate - but he lost to Republican Warren G. Harding.

Chambers had little to do with the day-to-day operations of the vast media empire.

“She loved Atlanta,” said her grandson Alex Taylor, the current president and CEO of Cox Enterprises. "She thought it was a critical place in the world. She traveled a lot to France. She had a place in New York. But she loved Atlanta and did her best to bring all the best to it. She would want to be known for being a person who cared about her home, someone who cared about making the world a better place in her own way.”

Chambers was born Dec. 1, 1919, in Dayton, Ohio, and attended Miss Porter's School in Farmington, Connecticut, and Finch College in New York. She was married twice, to Louis G. Johnson for 15 years and to Robert W. Chambers for 20 years. Both ended in divorce. She had two daughters with Johnson and a son with Chambers.

“We had her 100th birthday in her residence and celebrated Christmas together and we were holding her hands when she died,” Taylor said.