Police and prosecutors investigating the fatal shooting on the "Rust" film set involving actor Alec Baldwin held a press conference in Santa Fe, New Mexico, and released new details in the case. Authorities have recovered the gun and live round that killed cinematographer Halyna Hutchins and said all the crew members involved are cooperating. As of now there have been no charges filed against anyone in connection with the shooting.

SANTA FE, N.M. - Investigators said Wednesday that there was "some complacency" in how weapons were handled on the movie set where Alec Baldwin accidentally shot and killed a cinematographer and wounded another person, but it's too soon to determine whether charges will be filed.

Santa Fe County Sheriff Adan Mendoza noted that 500 rounds of ammunition — a mix of blanks, dummy rounds and suspected live rounds — were found while searching the set of the Western "Rust."

"Obviously I think the industry has had a record recently of being safe. I think there was some complacency on this set, and I think there are some safety issues that need to be addressed by the industry and possibly by the state of New Mexico," Mendoza told a news conference nearly a week after the shooting.

Authorities also confirmed there was no footage of the shooting, which happened during a rehearsal.

Detectives have recovered a lead projectile they believe the actor fired last week. Testing is being done to confirm whether the projectile taken from Souza’s shoulder was fired from the same long Colt revolver used by Baldwin. The FBI will help with ballistics analysis. 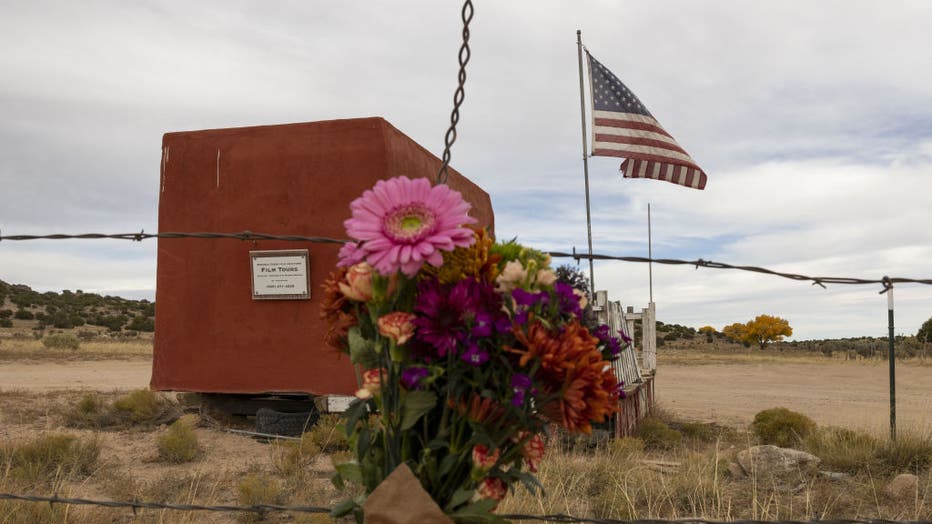 NEW MEXICO, USA - OCTOBER 23: Flowers are seen in the entrance to the film set of "Rust" after Hollywood actor Alec Baldwin fatally shot a cinematographer and wounded a director when he discharged a prop gun on the movie set in Santa Fe, New Mexico,

Two other guns were seized, including a single-action revolver that may have been modified and a plastic gun that was described as a revolver, officials said.

Souza, who was standing behind Hutchins, told investigators there should never be live rounds present near the scene.

"We suspect that there were other live rounds, but that’s up to the testing. But right now, we’re going to determine how those got there, why they were there because they shouldn’t have been," Mendoza said.

RELATED: What is a prop gun? On-set deaths involving them have happened before

District Attorney Mary Carmack-Altwies said investigators cannot say yet whether it was negligence or by whom. She called it a complex case that will require more research and analysis.

"It will take many more facts, corroborated facts, before we can get to that criminal negligence standard," she said.

Investigators said they planned to follow up on reports of other incidents involving misfires with guns on the set.

Mike Tristano, a veteran armorer, or movie weapons specialist, was alarmed to hear that live rounds were mixed in with blanks and dummy rounds.

"I find that appalling," Tristano said. "In over 600 films and TV shows that I’ve done, we’ve never had a live round on set."

There are new details in the fatal movie shooting on the set of the Alec Baldwin film, "Rust," which took the life of cinematographer Halyna Hutchins. A real gun was used in the shooting with live ammunition, which was contrary to what Baldwin believed when he was handed the weapon during filming. The gun, according to TMZ, was used for target practice by crew members while not filming the movie.

The shooting has baffled Hollywood professionals and prompted calls to better regulate firearms on sets or even ban them in the age of seamless computer-generated imagery. Court records say that an assistant director grabbed the gun from a cart and indicated the weapon was safe by yelling "cold gun."

The armorer on the Baldwin film, Hannah Gutierrez Reed, said she checked dummy bullets on the day of the shooting to ensure that none were "hot" rounds. She also told a detective that while the guns used for filming were locked up during a crew lunch break, ammunition was left on a cart unsecured, according to a search warrant released Wednesday ahead of the news conference.

Gutierrez Reed told a detective that no live ammo was ever kept on the set.

When reached Wednesday by The Associated Press, she declined to comment. She said Monday by text message that she was looking for a lawyer.

Assistant director David Halls, who handed the gun to Baldwin before the shooting, said Gutierrez Reed typically opened the hatch of the gun and spun the drum, though he couldn’t recall if she did that before the shooting. He said he only remembered seeing three rounds in the gun, according to the warrant.

"He advised he should’ve checked all of them, but didn’t," according to the affidavit obtained by FOX 11 Los Angeles.

After the shooting, Halls took the gun to Gutierrez and said he saw five rounds in the gun, at least four of them were dummy rounds indicated by a hole on the side and a cap on the round. Halls said there was also a casing in the gun that did not have the cap and did not have the hole indicating it was a dummy, the warrant said. 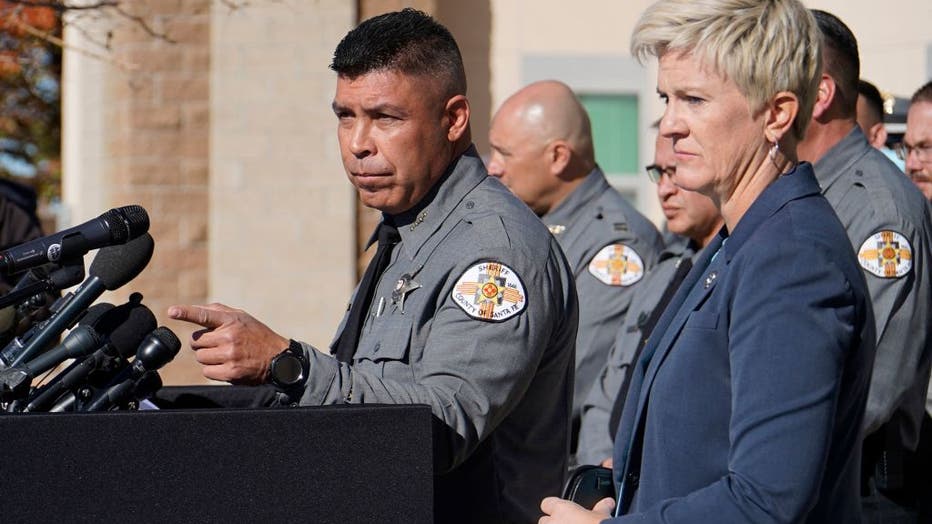 Santa Fe County Sheriff Adan Mendoza, with District Attorney Mary Carmack-Altwies (R), speaks to the press on Oct. 27, 2021, about the criminal investigation regarding the fatal shooting and wounding of crew members on the set of the movie "Rust," in

Halls "advised the incident was not a deliberate act," according to the warrant, which was issued Wednesday in order to search a truck that was used on the set.

Baldwin, 63, who is known for his roles in "30 Rock," "The Departed" and "The Hunt for Red October," along with his impression of then-President Donald Trump on "Saturday Night Live," has described the killing as a "tragic accident."

The gun Baldwin used was one of three that the armorer had placed on a cart outside the building where a scene was being rehearsed, according to court records.

The production of "Rust" was beset by workplace disputes from the start in early October. Hours before the shooting, several camera crew members walked off the set amid discord over working conditions, including safety procedures.

Baldwin in his role as actor appeared unlikely to be held criminally or civilly liable for the tragedy. As a producer, however, he is among a long list of associates on the film who could face some sort of liability.

Concerns have been raised about Halls' safety record by colleagues on two previous productions. Halls has not returned phone calls and email messages seeking comment.

Rust Movie Productions, the production company, says it is cooperating with authorities and conducting its own internal review of procedures with the production shut down.