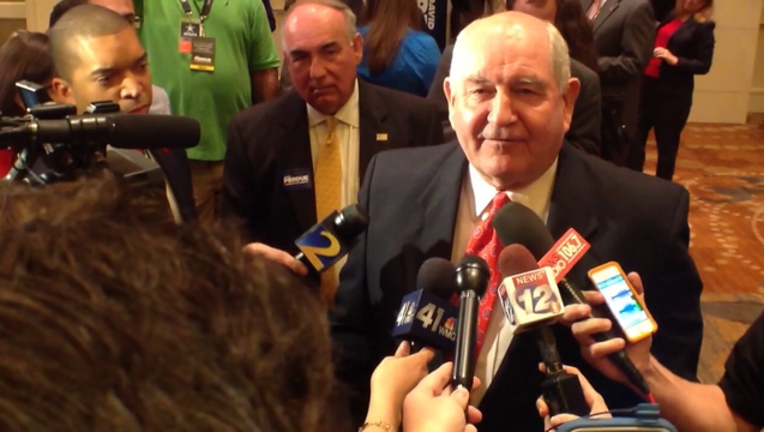 WASHINGTON (AP) - Agriculture secretary nominee Sonny Perdue says he will step down from several positions at companies bearing his name, restructure family trusts and create blind trusts to avoid a conflict of interest if he is confirmed.

In a written agreement with a government ethics agency, the former Georgia governor said he will step down from positions at the National Grain and Feed Association and the Georgia Agribusiness Council.

Senators have been waiting for more than seven weeks for the agreement, which is dated March 7 but was posted on the Office of Government Ethics website over the weekend. President Donald Trump nominated Perdue on Jan. 18, but the formal nomination was only sent to the Senate last week.

The Senate Agriculture Committee has received the paperwork, a final step before scheduling a confirmation hearing. A spokeswoman for the panel said committee staff is reviewing the paperwork and will schedule the hearing when the review is complete.

A financial disclosure form released by the ethics office shows substantial assets from agricultural companies, including a grain merchandising company called AGrowStar, which is worth between $5 million and $25 million.

The ethics forms are required by the Ethics in Government Act of 1978, passed after the Watergate scandal.

In the weeks since he was chosen, Perdue has held several meetings with senators on Capitol Hill. Farm-state senators have mostly praised his nomination, including Democrat Heidi Heitkamp of North Dakota, who said she would support him.

Perdue, 70, is a farmer's son who would be the first Southerner in the post in more than two decades. He built businesses in grain trading and trucking before becoming the first Republican governor of Georgia since Reconstruction.