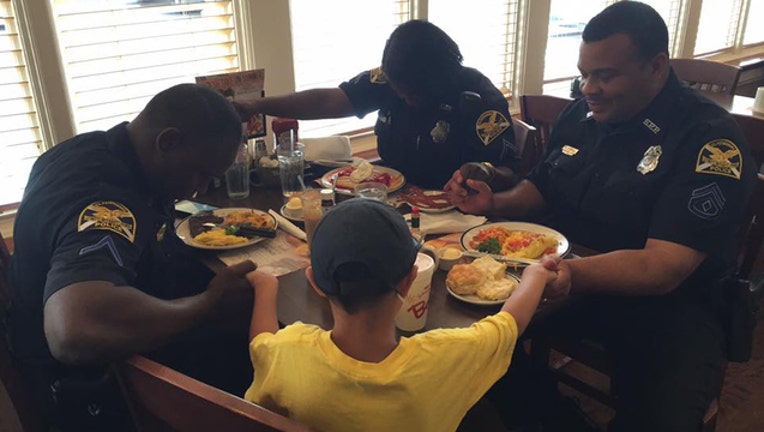 ST. PETERSBURG, Fla. - A little boy in St. Petersburg took a moment after having breakfast with mom to stop and say a prayer with St. Petersburg police officers.

Kelly Garza said she and her six-year-old son, Joshua, had just come from swim lessons and were having breakfast at Joshua's favorite place, Bob Evans, on Monday when he saw the manager of the restaurant shake an officer's hand and thank him for his service.

After that, Garza said Joshua decided he wanted to say a 'thank you' of his own. "He likes to pray at church, he's a big prayer warrior," said his mother.

So, as they got up to leave, little Joshua asked the officers if he could pray for the officers' safety. His mother said the officers had just gotten their food and they had just said grace when Joshua approached them to say a prayer with them. She took a photo of him sitting down at the table with them, holding hands, with their heads bowed in prayer.

She stepped back so as to not interfere, she said, and she heard him finish the prayer with, "And please help us all to live a good life. Amen."

Though he is only six, Garza said he has had such a hard time after learning of the shootings in Orlando that he brought it up in church and they prayed for the victims' families. "He knows what's going on in the world, and he doesn't like it," she said.

Garza said, after this prayer on Monday, there wasn't a dry eye in the house.