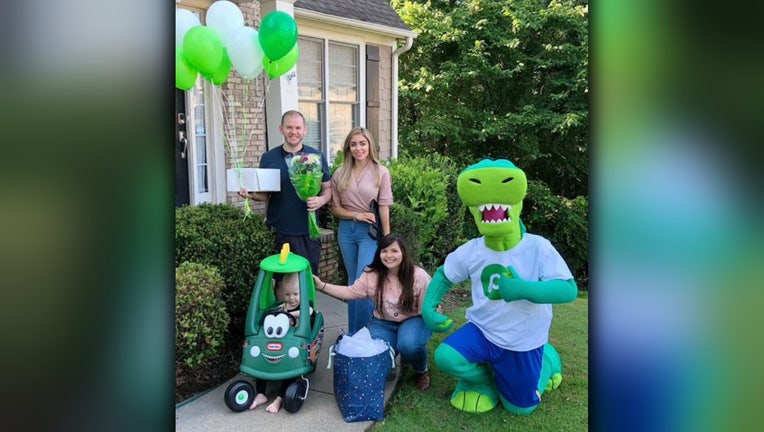 After she heard about Reese’s love for Publix, company associate Lacey White (bottom middle), along with the Publix mascot (bottom right), surprised Reese and his family with Reese’s own Publix car. (Courtesy of the Hayhurst family)

The 3-year-old from Buford, Georgia, was diagnosed with leukemia in December 2020.

Because Reese's chemotherapy treatment has weakened his immune system, he hasn’t been able to get out much other than the local Publix while his mom, Amanda Hayhurst, shops for groceries.

"I did take him on my typical grocery runs and he would get so excited to drive the Publix shopping cart car…he would just light up over that cart," Hayhurst told FOX News.

In fact, Reese started asking to "drive the car" every day, so Hayhurst started spacing out her grocery list every week.

"[I said], 'OK, I'll just buy a little bit here and a little bit there – that way I can go four or five times a week because that's how often he asked," Hayhurst said, laughing. "It’s so cute because out of all the places in the world, he always asks to go to Publix."

White then decided to get Reese his own Publix car – made from a green Little Tykes car and complete with the same decals on Publix’s shopping cart cars. It even has a license plate with Reese’s name on the back.

White drove more than eight hours from Florida to the Hayhursts’ home to surprise Reese. With the help of Publix’s dinosaur mascot, the toy car, a green dinosaur cake and notes from other Publix associates were gifted to Reese.

"It meant so much to us," Hayhurst said. "So much of what we walk through is hard and heavy and scary, so keeping his spirits up and him just having fun and our family having fun has been really important."

Hayhurst said that Reese loves the car and uses it almost every day, which gives Hayhurst a bit of a break on her grocery trips.

"That has limited my Publix shopping a little bit because we do have that now," Hayhurst said. "I can get everything at once now."

RELATED: Publix requiring masks for employees regardless of vaccination status

Reese has PH-positive B-cell acute lymphoblastic leukemia and is being treated at the Aflac Center and Blood Disorder Center of Children’s Health Care of Atlanta.

However, because Reese is also Philadelphia chromosome-positive (PH-positive) – which means his body produces a protein that "drives the leukemia cells" – the leukemia is more difficult to treat.

Recent developments in treatment, including a new therapy for which Reese is participating in a clinical trial, have been able to target that protein and "kill the leukemia cells in a more targeted way," Summers told FOX. But Reese still has to undergo "more intensive" treatment than someone who has the same type of leukemia who isn’t PH-positive.

Regardless, Summers said the 3-year-old has stayed strong.

"Despite everything, he's been really resilient and has really bounced back well from the pretty challenging treatment he's been through," Summers said.

When Reese was first diagnosed, Hayhurst said "it was like the rug was just pulled out from under us."

"The first few weeks were really excruciating," she said.

Hayhurst said she and her family have been able to handle the situation with the help of their faith.

"God has really carried us through it and he's surrounded us with a great community," she said.