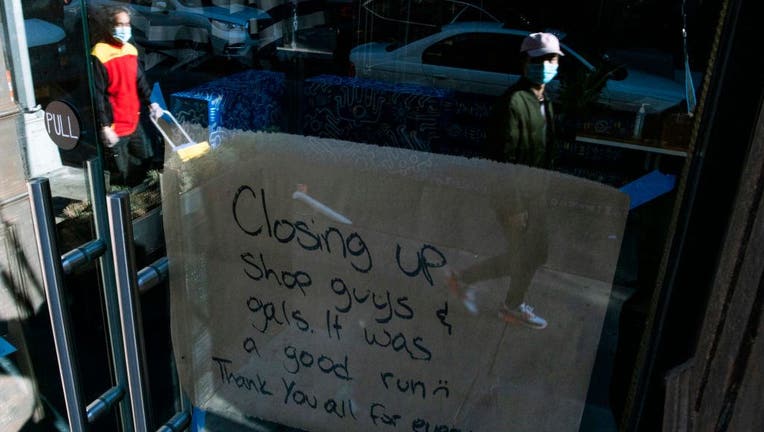 People walk by a closed restaurant as the global outbreak of the coronavirus disease (COVID-19) continues increase on November 23, 2020 in New York. (Photo by Eduardo MunozAlvarez/VIEWpress/Corbis via Getty Images)

While the COVID-19 pandemic has already forced more than 110,000 restaurants out of business this year, a new report from the National Restaurant Association suggests time is running out for thousands more.

The organization said Monday that 10,000 establishments have closed in the last three months alone and told congressional leaders in a letter that current conditions are unsustainable.

According to a survey of 6,000 restaurant operators, 87% of full-service restaurants saw a 36% drop in sales and 83% said they expect the coming winter months to be "even worse," with 58% anticipating layoffs and furloughs on the horizon.

Of the restaurants that have already closed, an estimated 17% had served their communities for an average of 16 years, and 16% had been running for at least 30 years.

Ald. Tom Tunney’s (44th) Lake View Ann Sather Restaurant and a Wicker Park club that held a party with 142 mask-less patrons were among the latest businesses to be cited by the city for violating the city and state’s indoor service ban.

Less than half of the former restaurant owners say they plan to remain in the industry in the future.

"What these findings make clear is that more than 500,000 restaurants of every business type -- franchise, chain and independent -- are in an unprecedented economic decline," wrote the group's executive vice president, Sean Kennedy. "And for every month that passes without a solution from Congress, thousands more restaurants across the country will close their doors for good."

The restaurant industry "simply cannot wait for relief any longer," he added, urging lawmakers to support both a bipartisan compromise proposal and a larger stimulus package in 2021.

As the political haggling continues with just days left to pass a bill, the White House on Tuesday offered Democrats a $916 billion pandemic stimulus proposal -- though what aid would come to restaurants remains unclear.

Hundreds of people tried jamming into Guthrie’s Tavern in Wrigleyville Tuesday night after the bar announced it is permanently closing on Thursday because of the city’s new COVID restrictions.

The RESTAURANTS Act of 2020 was passed by the Democratic-led House of Representatives in October, but the measure has not been considered by the upper chamber.

Senate Majority Leader Mitch McConnell, R-Ky., had previously said that he would like to see a combined spending proposal and coronavirus relief bill on Monday so lawmakers can approve them before existing government funding runs out on Dec. 11.

That leaves restaurant owners in what they see as an untenable position, as cases surge across the nation and states reinstate stringent health restrictions. Many have refused to shut down this time.

"Efforts in Washington to find the 'perfect' solution are laudable, but the lack of progress in the meantime has led too many operators to give up on the government and close down for good," Kennedy noted.