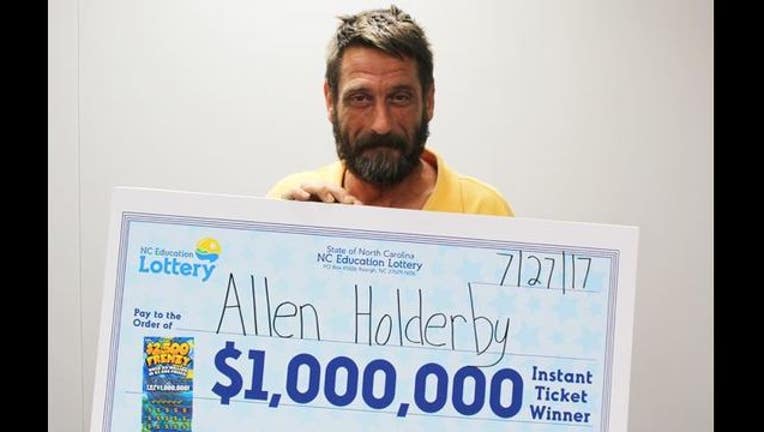 Holderby served in the Army for 13 years. “I’ve done it all,” Holderby said to Lottery officials. “I was infantry, special forces, a paratrooper.”

The big win came after he bought a $2,500 Frenzy scratch-off ticket at the Oakhill Deli & Grill on Oakdale Road in Charlotte.

“I couldn’t believe it at first,” Holderby said. “I started shaking. My wife didn’t believe me either. When I called to tell her, she called me a liar.”

“He’s pulled pranks before,” his wife Janet said. “I wouldn’t believe him until I saw the ticket. It feels unreal, it hasn’t sunk in yet.”

Holderby claimed the prize Thursday at lottery headquarters in Raleigh. He had the choice of taking a $1 million annuity that has 20 payments of $50,000 a year or a lump sum of $600,000. He chose the lump sum. After required state and federal tax withholdings, he took home $417,009.

Holderby is the first player to win a top prize since $2,500 Frenzy launched earlier this month. Three top prizes remain.