How to go Christmas shopping for the thrifty consumer

The challenge for our loyal FOX 5 Atlanta viewers was a simple one—take a Christmas shopping list to a thriftshop,
find clothing, shoes or household items in such good condition you could wrap them up and stick them under the Christmas tree with absolutely no hesitation.

Lin Furlow of Atlanta is an occasional thrift shopper who was willing to give it a shot.
“I would not feel bad at all. I mean, I don't know how the recipient is going to feel about it, but I’m ok with it,” Furlow said as he chuckled with Fox’s Portia Bruner about giving thrifted gift to his teenaged daughter and 20-something son.

Erika Godfrey of Newnan is a frequent thrift store shopper chose to scout out holiday gifts for girlfriends.

“I found a few pair of boots that still have quite a bit of tread on them and then I found these really cute Jessica Simpson heels for $5.99. Can't beat that,” said Godfrey.

This Newnan mother spent the most on our recent Thriftmas shopping adventure, but after nearly two hours in the store, she also walked out of the Buckhead thriftshop with the largest number of Christmas gifts! $50 for 11 items! Way to go, Erika!

The Newman mother is no stranger to thrift stores, so it didn’t take long to load up her basket at the Goodwill on Piedmont Road in Buckhead. She ended up spending $50 on 11 different items including shoes, dresses, sweaters and other women’s apparel. But for retired school teacher Catherine Couch, it had been a long time since she set foot in a thrift store.

“I used to go a long time ago, but it just became a bit cumbersome looking through all those items,” she told Bruner the day she agreed to participate in the Fox 5 thriftmas shopping challenge.

Despite being the rookie among the crowd of FOX 5 thriftmas shoppers, Ms. Couch actually hit the jackpot. Less than two hours and $30 dollars later, she walked out of the Piedmont Road store with a box full of Christmas gifts for her family in Hiram. Her box of goodies included $3 China plates, $2 glass candle sticks, $1 glass bowl from Poland, $1 glass goblets, a silver plated candy dish for $2, a small Lenox bowl for $6, a Fossil leather handbag for $4, a $2 pair of gloves and much more.

Mr. Lin had a big win with a $7 LL Bean jacket for his son. We don't want to spoil his daughter's Christmas day surprise, but he only spent $14 bucks for two other items for her. 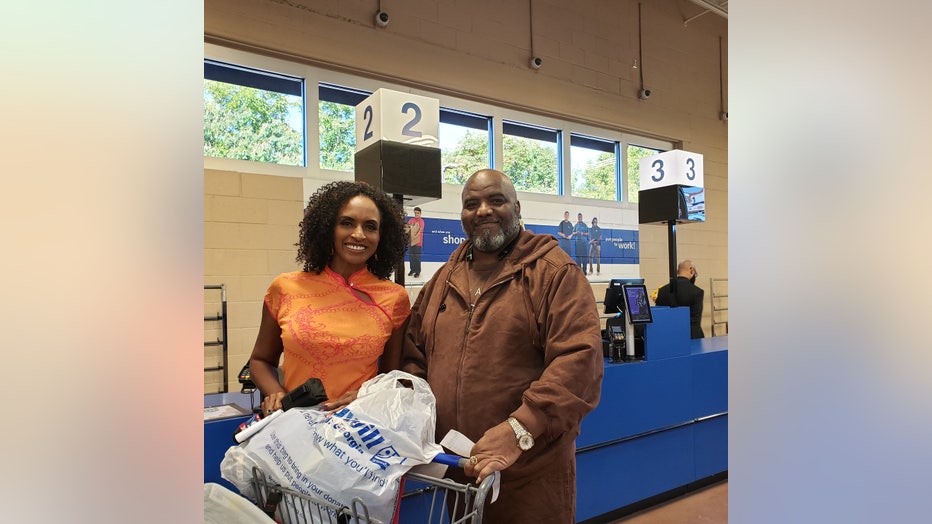 Frequent thrifter Tameka Brown of Atlanta did well, too.

“I found this cashmere silk blouse from Banana Republic for only $4 and a matching scarf for $2,” she said as the other Fox 5 viewers made their way through the store. She also found a hardback copy of a recently released book that cost her $30 a few months ago. At Goodwill, she paid only $3 for it and plans to give and the sweater/scarf set to a friend.

Melanie Smith of Alpharetta found Ann Taylor and Ralph Loren blazers for $7 a piece and a J.Crew sweater for $4.
“You just have to take your time and look because you really can find some quality pieces that you know you can trust because of the brand,”

Kristina Millsaps of Loganville and Petrina Pryor of Atlanta focused on gifts in the home goods and housewares sections. They both created holiday themed-gift sets that included crafty containers, picture frames, table décor, goblets, candles and other nick-knacks. They each spent less than $20.

“What I like is that you can come to a store like Goodwill and find things that still have the tags on them. You shouldn’t limit yourself,” said Millsaps.

The key for each of the Fox 5 viewers was to shop thoroughly and patiently and to be creative. All seven left the Buckhead Goodwill with a smile on their faces and bags full of Christmas gifts.