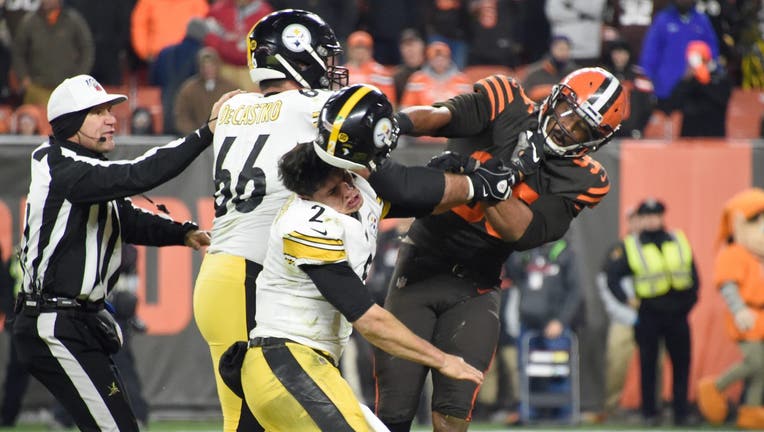 Rudolph was fined $50,000 on Saturday by the NFL for his involvement in the melee that began when Browns defensive end Myles Garrett pulled off his helmet and hit him over the head with it.

Rudolph avoided suspension for his actions - he tried to pull off Garrett’s helmet and charged him - but was one of 33 players fined by the league for their involvement. The league penalized 29 players $3,507 apiece for “entering the fight area.”

In all, the league handed out more than $700,000 for discipline stemming from the ugly final seconds of Cleveland’s 21-7 win over Pittsburgh last week. There was another $77,206 assessed for personal fouls earlier in the game.

Garrett was indefinitely suspended by the league for tearing off Rudolph’s helmet and using it “as a weapon.” His appeal was denied this week when he told appeals officer James Thrash that Rudolph used a racial slur against him.

Rudolph wrestled with Garrett and unsuccessfully tried to yank off the Pro Bowler’s helmet before running after him and then being struck on the top of the head.

Earlier this week, Rudolph said there was “no acceptable excuse," for his behavior. He has denied using the racial slur, and the league has found no evidence such a slur was used.

Garrett was also fined $45,623 for his shocking attack, which will cost him the rest of the regular season and playoffs - if Cleveland qualifies without him. Garrett will also lose $1.14 million in game checks.

The league said Garrett must meet with Commissioner Roger Goodell’s office before he can be reinstated.

Browns defensive tackle Larry Ogunjobi was suspended for Sunday’s game against Miami for shoving Rudolph to the ground. Thrash upheld Ogunjobi’s suspension but rescinded his $10,527 fine.