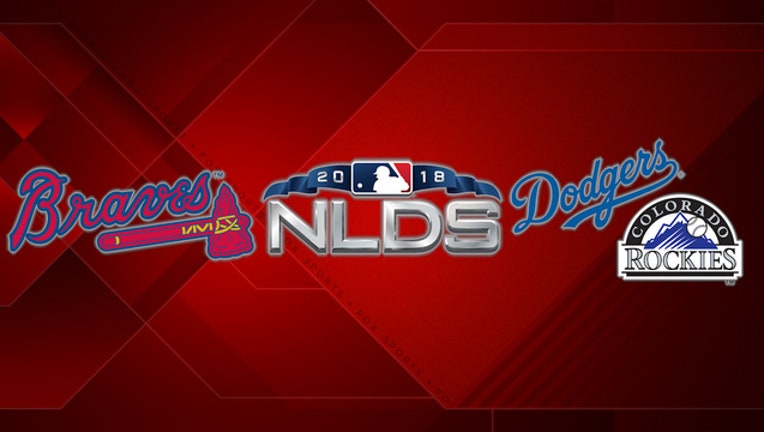 PHILADELPHIA (AP) - Freddie Freeman, Nick Markakis and the NL East champion Atlanta Braves are set to open the playoffs on the road.

All they need is an NL West champion to play.

Needing at least a win to have a shot at home field in the NLDS, the Braves lost to the Philadelphia Phillies 3-1 on Sunday.

The Braves needed a win and a loss by both Colorado and Los Angeles to secure home-field advantage when the division series starts Thursday.

The Dodgers and Rockies both ended up winning big, setting up a one-game playoff to decide the NL West. But the Braves' second straight loss in Philadelphia made those results inconsequential for Atlanta.

"I don't have a pick one way or the other," he said. "I'm just glad we're going to play Thursday."

Cesar Hernandez hit a leadoff home run, and Rhys Hoskins' RBI double in the fifth inning helped a Phillies team that was 15 games over .500 on Aug. 5 finish with 80 wins.

Losing home field was a mild disappointment to a Braves team that was a surprising, resounding success under Snitker. The Braves had lost 90-plus games in three straight seasons in a rebuild that was expected to see them need at least another season to contend for a playoff spot. Freeman, Nick Markakis and NL rookie of the year contender Ronald Acuna Jr. instead helped them become the first NL team to win 90 games (90-72) after three successive seasons of 90-plus losses.

"I'm happy for all the guys in there that endured all that," Snitker said.

There's more work ahead before they play either the Los Angeles Dodgers or Colorado Rockies. Snitker said he'll meet with the coaching staff and other members of the organization on Monday to determine the 25-man playoff roster. Shortstop Dansby Swanson's sore left wrist may keep him off that roster. He took some swings on Sunday and continued to receive treatment.

With or without him, the Braves are in the playoffs for the first time since 2013.

"It's a good feeling what we accomplished this year - where we came from, where we started to where we are right now," Snitker said. "There were multiple boxes we needed to check along the way here, and we did. It's very gratifying. I'm proud of the guys in that room and how they carried themselves and showed up to play every single day."

Markakis led the way there, playing all 162 games for the Braves, and Freeman led the NL in hits.

Kevin Gausman (10-11) took the loss in his first start since Sept. 20 and settled down after Hernandez's leadoff homer.

"I just kind of grooved that first pitch in there. I mean, it was right down the middle," he said.

Tommy Hunter (5-4) earned the win in relief for the Phillies, and Seranthony Dominguez got his 16th save to end a season where expectations soared in early August only to become unraveled in one of the bigger - but not close to the biggest - late-season collapses in team history. The Phillies went 17-34 after they were 15 games over .500 on Aug. 5.

Rookie manager Gabe Kapler said 2019 could be a special season should his key players continue to improve - something think about in a pivotal offseason.

"It's going to include probably a lot of thinking about the Phillies," he said.

Freeman led the National League with 191 hits. He's the first Brave to lead the NL outright since Terry Pendleton had 187 in 1991.

Freeman went 0 for 1 with a walk against the Phillies.

Markakis because the fifth Atlanta Brave to start all 162 games since 1962. Markakis started in right field and struck out twice before he was replaced for some needed rest.

"He's the definition of a pro," Snitker said.

Sean Newcomb retired two batters in the sixth in the first relief appearance of his career. Newcomb went 12-9 in 30 starts this season and had started all 49 of his previous appearances.

Phillies starter Ranger Suarez struck out five in three innings - and hit a stand-up triple for his first career hit.

Hoskins addressed the crowd before the game and said there was "obviously a little bit of disappointment with the way the season ended" but added that the Phillies would learn from it and be better in 2019.

On fan appreciation day, Hoskins said Phillies fans were the best in baseball.

"If we had finished .500 this year, it would have been a huge step forward," Snitker said.

Braves: Play Game 1 of the NLDS on Thursday, Game 2 Friday and Game 3 Sunday. Mike Foltynewicz is the likely Game 1 starter.

Phillies: GM Matt Klentak and team president Andy MacPhail will meet the media this week to discuss plans for the offseason.