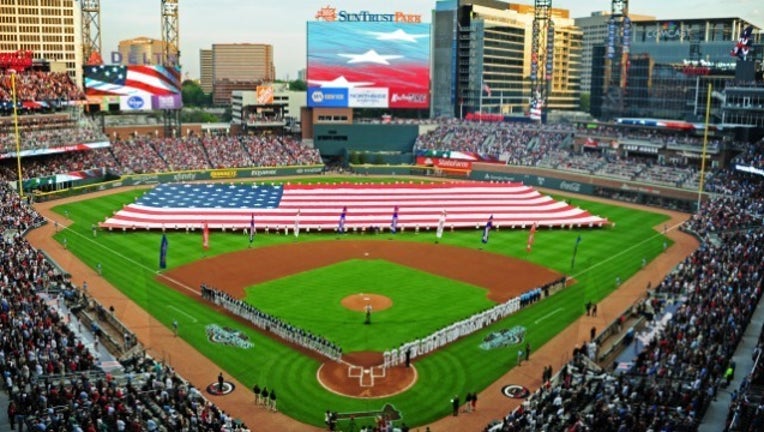 ATLANTA (AP) - Just ahead of a torrential downpour, Nick Markakis made it an opening day to remember for the Atlanta Braves.

Gabe Kapler would rather forget his managing debut.

Markakis delivered a three-run homer with two outs in the ninth inning , capping the Atlanta Braves' historic comeback from a five-run deficit that rocked the Philadelphia Phillies 8-5 Thursday and immediately turned up the heat on their new manager.

It was the Braves' biggest rally on opening day since at least 1900, and their first walk-off hit to begin a season since 1998.

Kapler faced scrutiny for lifting starter Aaron Nola with the Phillies up 5-0 and one out in the sixth inning . The youngest opening-day starter for Philadelphia since Dennis Bennett in 1964 had thrown only 68 pitches, surrendering three hits.

"Yeah, I was a little surprised," the 24-year-old Nola said. "We just want to go as long as we can. As a competitor, you feel like you can get guys out in any situation. ... I had a good bit left."

A massive storm system moved through Atlanta within 10 minutes of Markakis' homer, quickly turning the warning track into a muddy quagmire.

"I was just trying not to do too much," Markakis said. "I told myself to calm down, take a nice easy swing, and try not to miss it."

Hector Neris (0-1) gave up an infield hit to Charlie Culberson and an intentional walk to Freeman before Markakis drove a 1-1 pitch over the right-field wall.

Nola wound up being charged with a run while watching from the dugout when Hoby Milner gave up Freeman's two-run shot .

In all, Kapler used five relievers. They went 3 1-3 innings, gave up six hits, walked three and were charged with seven runs, six of them earned.

"We believe in all our pitchers," the manager said. "We believe in Hoby Milner's ability to come in and get those two men out. All our guys, all our guys who pitched tonight, we have a tremendous level of confidence in."

Kapler added, "Nola did a tremendous job. I told him as much when he came off the mound. He knows he was spectacular tonight. I can't wait to see him go out for his next start."

Albies homered leading off the eighth , sparking a three-run inning that tied the game at 5. The Phillies contributed greatly, walking two before a terrible defensive sequence by catcher Andrew Knapp . He let a pitch graze his glove for a passed ball, caught a break when the ball ricocheted right back to him, only to skip a throw into left field trying to catch Freeman when he took off for third.

Freeman sprinted home on the error to make it 5-4, and Preston Tucker followed with a run-scoring single.

Arodys Vizcaino (1-0) earned the win by striking out the side in the ninth .

Julio Teheran started on opening day for the fifth straight year , the most for any Braves pitcher since the team moved to Atlanta in 1966. He gave up only four hits over 5 2-3 innings, including Cesar Hernandez's homer, and wound up being charged with four runs when the bullpen faltered as well.

The game drew an announced crowd of 40,208, which was nearly 1,000 shy of the listed capacity at 2-year-old SunTrust Park. The Braves said it was officially a sellout, even though there were noticeable patches of empty seats throughout the stadium.

Phillies: RHP Pat Neshek was not available out of the bullpen because of a sore right lat. "My main intention is to keep our guys healthy and strong for 162 games," Kapler said.

Braves: C Tyler Flowers left the game during his first at-bat of the season after fouling off a pitch in the second inning. Flowers winced in pain and headed straight to the clubhouse with what was described as left oblique discomfort. Kurt Suzuki finished Flowers' at-bat and took over behind the plate.

NOT AROUND AT THE END

Braves manager Brian Snitker was ejected in the ninth for arguing with third-base umpire Jordan Baker about the call on a checked swing.

Snitker said his complaint was a carryover from the eighth, when Dansby Swanson was called out by first-base umpire Greg Gibson on a similar play.

"Dansy was rung up on one that wasn't nearly as bad," Snitker said.

Hank Aaron and his wife were chauffeured around the edge of the field before new Hall of Famer Chipper Jones stepped out of the Braves dugout to throw out the ceremonial first pitch. Georgia football star Nick Chubb shouted "Play Ball!" to get the game started.

The Braves will counter with RHP Mike Foltynewicz, who was 10-13 with a 4.79 ERA last season.