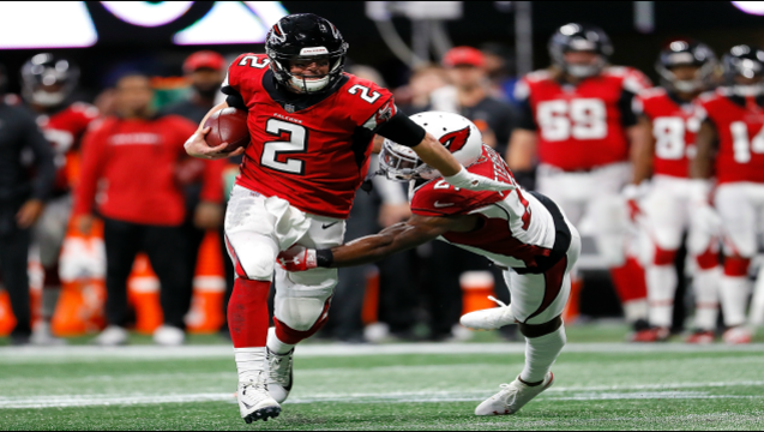 ATLANTA (AP) - The Falcons were struggling again, and quarterback Matt Ryan was looking for something to spark the team.

Ryan got just what he wanted from his teammate, linebacker Deion Jones.

"That was awesome to get us going," Ryan said. "I felt like the energy that really got everybody into it, and from that point forward we played really well."

Julio Jones made an acrobatic touchdown catch on a pass from Ryan, Deion Jones returned an interception for an early score, and Atlanta snapped a five-game losing streak with a 40-14 victory over the Arizona Cardinals on Sunday.

Playing their final home game of the season, the Falcons (5-9) forced three turnovers and sacked Arizona quarterbacks seven times, a single-game season high for both teams. Arizona (3-11) has dropped two straight and five of six under first-year coach Steve Wilks.

"I want to start out by saying I take full responsibility for what you saw out there tonight," Wilks said. "It was unacceptable, not even close."

Julio Jones caught six passes for 82 yards, all in the first half. His 22-yard score in the closing seconds before intermission put the Falcons up 26-7. Jones beat Patrick Peterson's bump-and-run coverage down the left sideline, turning the cornerback around and twisting around him to make a diving catch.

Ryan ran for a 1-yard score early the second quarter and finished with 231 yards passing in his 100th career victory. Matt Bryant added two short field goals, and Tevin Coleman had a 43-yard TD run in the third quarter as Atlanta won for the first time since Week 9 at Washington.

Playing behind a makeshift offense line that has lost six players to injured reserve, Arizona's Josh Rosen was under duress all afternoon and finished with a 38.4 passer rating.

The rookie quarterback got the Cardinals off to a fast start with running back David Johnson catching two long passes to set up a short TD run that made it 7-0, but Arizona was essentially done after Deion Jones scored a touchdown for the third time in eight career interceptions.

In his fourth game back after spending most of the season sidelined by a foot injury, Jones forced a 7-all tie in the first quarter, snagging Vic Beasley's batted ball from the air in the flats and running 41 yards for Atlanta's second defensive TD of the season.

QUESTIONS IN THE DESERT

It feels like a couple of months have passed since Arizona enjoyed a season highlight under Wilks, a 20-17 win at Green Bay two weeks ago.

The Cardinals were flat last week at home against Detroit and gave themselves almost no chance at Mercedes-Benz Stadium. Even with so many injuries, the performance was so uninspiring that Wilks might be wondering if he will return for a second season.

Arizona showed why it began the day with the league's worst scoring offense, worst passing attack and second-worst ground game.

"Obviously on the road, you can't spot people points and turn the football over like we did today," star receiver Larry Fitzgerald said. "It was just an avalanche after the start."

Julio Jones injured his ribs on the TD catch and only played a few snaps in the third with the outcome all but assured. Jones missed practice one day this week with flu-like symptoms.

Injured Atlanta running back Devonta Freeman likely won't return this season, but he was on the sideline cheering on his teammates. Tight end Austin Hooper did not catch a pass and was only targeted once as he played through a sore knee he hurt last week at Green Bay.

Johnson, playing with a sore quadriceps, ran 11 times for 33 yards and caught three passes for 68.

EYES ON THE PRIZE

The Falcons had a respite from season-long difficulty in creating takeaways. Brian Poole had an interception and combined with Jarrett on a strip-sack fumble recovery. Bruce Irvin had his best game with Atlanta, finishing with 1½ sacks and three QB hits.

Beginning the game with a less than 1 percent chance of making the playoffs, the Falcons were mathematically eliminated.

"You make your bed throughout the year, and today was a good day for us as a team, but obviously not playing in the postseason is disappointing," Ryan said. "But we'll enjoy the win today and try to win these next two."