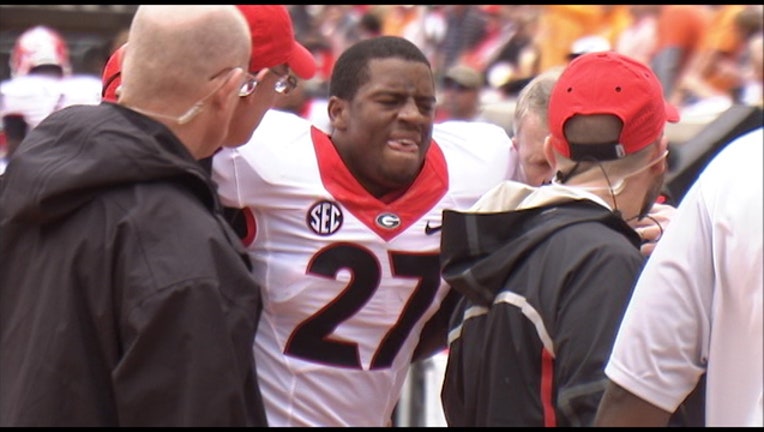 KNOXVILLE - KNOXVILLE, Tenn. (AP) -- Whether leading or trailing, the Tennessee Volunteers have a way of making it seem that no lead is insurmountable.

Joshua Dobbs threw for a career-high 312 yards, ran for 118 more and accounted for five touchdowns Saturday as Tennessee erased a 21-point deficit in a 38-31 victory over No. 19 Georgia. The Volunteers also have experienced the other side of comebacks. They had dropped three of four, blowing two-touchdown leads in each of their losses.

"They had a different look," Tennessee coach Butch Jones said. "This football team was not going to be denied. They were going to find a way to win the football game. I'm just happy for them because they deserve to have this feeling."

The defeat was doubly painful for Georgia (4-2, 1-2 SEC), which lost star running back Nick Chubb to an injured left knee on the first offensive play. Coach Mark Richt was unsure after the game about the severity of Chubb's injury but the back looked to be in a lot of pain when being treated by trainers.

"As of right now we're still pretty hopeful that it won't require surgery, but we're not 100 percent sure of that," Richt said.

Georgia's Reggie Davis scored on a 70-yard punt return and 48-yard catch but dropped a potential game-tying 56-yard touchdown pass with less than four minutes left. The Bulldogs drove from their own 1-yard line to Tennessee's 27 in their final possession, but Brian Randolph broke up Greyson Lambert's pass to Malcolm Mitchell in the right corner of the end zone as time expired.

Dobbs is the only Tennessee player ever to throw for 300 yards and run for 100 yards in the same game. He also did it last year in a 45-42 overtime victory at South Carolina.

"We know football is a crazy game," Dobbs said. "Anything can happen, and we had that mindset all day. ... We did a great job of perseverance, and we kept fighting."

Tennessee trailed 24-3 late in the first half before rallying to beat a ranked team for just the second time in its last 30 tries. The Vols also ended a five-game losing streak in this annual series.

"The group of guys that we've got in our locker room is like no other," Tennessee linebacker Jalen Reeves-Maybin said. "How tight we are and just how much we're willing to fight for each other is something you really just can't describe. We're such a close team. When we hear all the outside distractions, we nip it in the bud."

The Bulldogs grabbed an early lead on Leonard Floyd's 96-yard return of a Jalen Hurd fumble and owned the 21-point advantage late in the first half before Tennessee came storming back.

The Vols got back into the game when Dobbs found Josh Smith for a 39-yard touchdown on a fourth-and-8 play. Michel fumbled away the ensuing kickoff at the Georgia 25, setting up a Dobbs 2-yard pass to Kamara that made it 24-17 at halftime.

"I feel like we lost the game because of me," Michel sad. "I wasn't holding on to the ball tight enough. I just gave it away and (it) took away momentum."

Tennessee continued its comeback in the second half even as injuries forced the Vols to start freshmen Jack Jones and Chance Hall on the right side of their offensive line.

"This is a true testament of will, of resiliency and perseverance," Jones said.
------
AP college football website: www.collegefootball.ap.org