ATLANTA - Tom Brady took a knee, then headed toward the Atlanta Falcons sideline to exchange a few words with Matt Ryan.

It all looked so familiar.

Yep, Brady did it again to Ryan and the Falcons.

Rallying Tampa Bay from a pair of 17-point deficits, Brady recreated his Super Bowl miracle by leading the Buccaneers on five straight scoring drives in the second half Sunday for a 31-27 victory over Atlanta.

The stakes weren’t nearly as high and the deficit wasn’t quite as daunting, but Brady’s latest blow to Atlanta took the Bucs (9-5) to the brink of their first playoff berth since 2007.

It sure didn’t look that way when Atlanta raced to 17-0 by halftime, or when the Falcons (4-10) restored their margin to 24-7 after Brady finally guided the Bucs to a touchdown on the first possession of the second half. 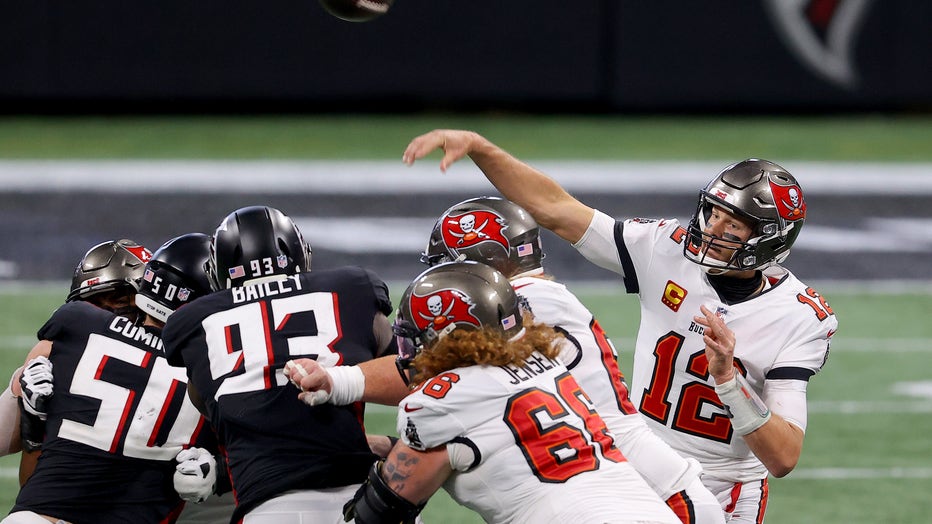 ATLANTA, GEORGIA - DECEMBER 20: Tom Brady #12 of the Tampa Bay Buccaneers throws a pass against the Atlanta Falcons during the second quarter in the game at Mercedes-Benz Stadium on December 20, 2020 in Atlanta, Georgia. (Photo by Kevin C. Cox/Getty

Turns out, the 43-year-old was just getting warmed up.

"He’s just a winner," Buccaneers coach Bruce Arians said. "He knows how to do it."

Brady certainly had plenty of experience to fall back on when it comes to breaking Atlanta’s heart.

In the 2017 Super Bowl, Brady famously led the greatest comeback in championship game history, rallying New England from a 28-3 deficit late in the third quarter to a 34-28 overtime victory that secured his fifth of six titles with the Patriots.

"Advertising: Enter the NFL Challenge contest on the FOX Super 6 app for free and you can win the $1M jackpot! Download now!"

Now, it looks like he’ll get a shot at another ring with his new team. The Bucs are on the cusp of wrapping up a wild-card berth, which is just what Brady had in mind when he left snowy Massachusetts for sunny Florida.

″A lot of it is his track record, the belief he inspires in all of us," tight end Cameron Brate said. "He’s done it on the biggest stage. That 28-3 game. We’ve seen him do it."

Brady sought out Ryan as soon as the clock expired. He had no trouble finding the Atlanta quarterback, who was headed his way wearing a mask. 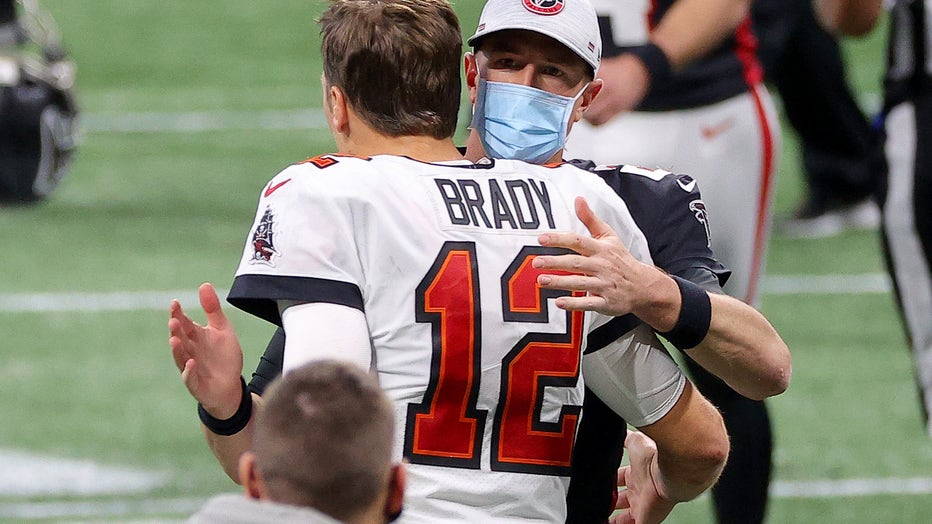 ATLANTA, GEORGIA - DECEMBER 20: Matt Ryan #2 of the Atlanta Falcons congratulates Tom Brady #12 of the Tampa Bay Buccaneers on their win after the game at Mercedes-Benz Stadium on December 20, 2020 in Atlanta, Georgia. (Photo by Kevin C. Cox/Getty Im

Brady capped his latest rally with a 46-yard touchdown pass to Antonio Brown with 6:19 remaining. The league’s oldest player finished 31 of 45 for 390 yards and two TDs.

"Great poise by everybody," Brady said. "Everybody hung in there. We got off to a tough start, but we found a way to win."

Brown, once considered the game’s greatest receiver but struggling to put his career back together after extensive off-the-field troubles, scored his first TD since joining the Bucs and his first with anyone since Week 2 of the 2019 season with Brady in New England.

He fell to his knees and raised both arms toward the stadium roof after hauling in the scoring pass.

"It’s been a long journey for me," Brown said.

Leonard Fournette had a pair of 1-yard TD runs, Brady hooked up with Chris Godwin on a 4-yard scoring pass, and Ryan Succop connected on a 27-yard field goal.

Ryan was 34 of 49 for 356 yards and three touchdowns for the Falcons, but he did little after connecting with Hayden Hurst on a 7-yard TD throw midway through the third quarter.

The Bucs suddenly starting getting pressure on the Atlanta QB, who was sacked three times— all of them credited to Devin White.

Atlanta failed to pick up a first down on four of its last five possessions, the only exception being a drive that ended with Younghoe Koo’s 52-yard field goal with 8:22 remaining, giving the Falcons a 27-24 lead.

It didn’t hold up.

It never does against Brady, who improved to 7-0 against the Falcons in his long career.

The Falcons took another demoralizing loss in a season filled with them. They already became the first in NFL history to blow fourth-quarter leads of at least 15 points in two straight games.

Now, this — which may have hurt even worse because of the guy who led the comeback.

Brady did it again to the Falcons.

"He’s never out of the fight," Atlanta’s Grady Jarrett said, "as I’ve learned too many times.

Ryan became the ninth quarterback in NFL history pass for 55,000 yards in his career.

Falcons: CB Blidi Wreh-Wilson went out in the first half after falling ill and did not return. OG James Carpenter (groin) and CB Isiah Oliver (cramping) also went out. With Oliver on the sideline, backup cornerback Tyler Hall was beaten on Brown’s game-winning touchdown.