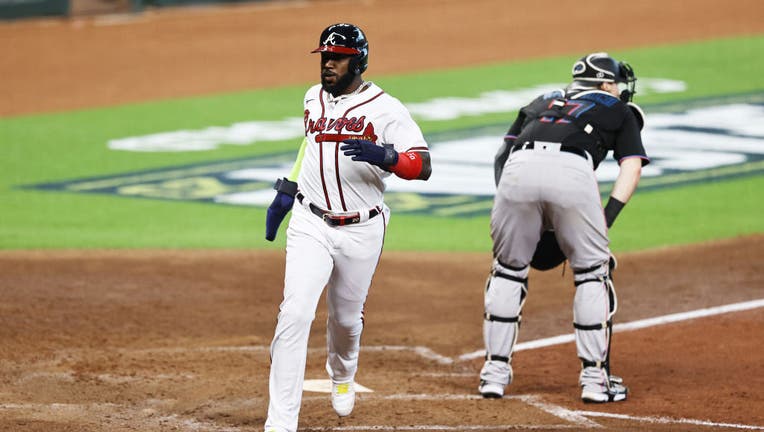 HOUSTON, TEXAS - OCTOBER 06: Marcell Ozuna #20 of the Atlanta Braves scores a run in Game One of the National League Division Series at Minute Maid Park against the Miami Marlins on October 06, 2020 in Houston, Texas. (Photo by Elsa/Getty Images)

Ronald Acuña Jr. made history with a leadoff home run to start things off for the Atlanta Braves in their NL Division Series opener against Miami.

And another hit — once more by the Marlins, this time with Sandy Alcantara’s fastball to the left hip — fired up the Braves and fueled their comeback in a 9-5 win Tuesday.

“I think it woke us up,” said Travis d’Arnaud, who launched a tiebreaking homer during Atlanta’s six-run rally in the seventh inning . “And we took advantage of that momentum.”

D’Arnaud also doubled and singled in driving in four runs and Dansby Swanson homered during the big comeback to help power Atlanta.

After shutting out Cincinnati for 22 innings during a two-game sweep in the wild-card round, the Braves relied on their bats in this opener. Game 2 of the best-of-five series is on Wednesday in Houston.

Acuña got things going for the Braves in the bottom of the first when he sent Alcantara’s second pitch into right-center for a homer. He watched it for a second before flipping his bat and rounding the bases as he became the youngest player (22 years, 293 days old) in postseason history with a leadoff home run.

Things turned testy in the third when Acuña was nailed by a 98 mph fastball. The showy All-Star outfielder held onto his bat and walked a few steps toward the mound before umpires and Braves coaches surrounded him and directed him away from Alcantara, who had started to walk toward him.

After a short delay, featuring plenty of chirping from both dugouts, Acuña took his base. Umpires warned the teams against further trouble.

There’s already been plenty — in 2018, when Acuña was a rookie and on a big homer-hitting streak, José Ureña nailed him with a fastball on his first pitch.

He’s become a Marlins target over the years.

“I looked over to their bench and said, ‘It’s been five times,’” Acuña said through a translator. “At this point I think we’ve grown accustomed to it.”

Alcantara insisted he didn’t intend to hit Acuña and that Miami’s game plan is simply to pitch inside to him, but added some trash talk after the denial.

Braves manager Brian Snitker said that even though he didn’t believe this pitch was on purpose, the Marlins have hit Acuña far too many times.

“You better be good at going in and not hitting him after a homer,” Snitker said.

Acuña and his teammates quickly got revenge.

The Braves trailed 4-3 in the seventh before Austin Riley and Acuña hit consecutive singles with no outs to chase Alcantara.

“As long as we’ve got a strike left we’re pretty dangerous,” Snitker said. “These guys can score a lot of runs in a hurry.”

And that’s exactly what they did.

Yimi Garcia took over and Freddie Freeman grounded into a forceout that left runners at the corners. Marcell Ozuna lined a single to left that made it 4-all.

Then d’Arnaud, in his first season with Atlanta, belted a slider over the fence in center field for a three-run drive that made it 7-4. The shot caused the Braves dugout to erupt with Acuña jumping over the railing to celebrate.

D’Arnaud, who played for the Mets, Dodgers and Rays last year, began the day as a .169 career hitter in the postseason, striking out 27 times in 83 at-bats.

But the Braves weren’t done yet.

James Hoyt replaced Garcia with one out and Swanson sent his first pitch off the wall in center field for a two-run homer.

“The tide kind of turned,” Miami manager Don Mattingly said. “We get that three-run lead, and then we give two runs right back. From there, really, we got stopped all day.”

The Braves, who have long dominated the Marlins in the NL East, improved to 3-0 this postseason after sweeping the Reds in the wild-card round for their first playoff series win since 2001.

The Marlins overcame a coronavirus outbreak that sidelined more than half the team in July to make the playoffs for the first time since 2003 before sweeping their wild-card series against the Cubs.

And the scrappy Marlins, who lost 105 games in 2019, looked good early in this one, using a three-run third inning to take a 4-1 lead. But their offense stalled after that and the Braves scored two in the third to get within one before putting Miami away with their home run barrage in the seventh.

The Braves got the win despite a tough start from Max Fried, who allowed six hits and a season-high four runs in just four innings. He was picked up by a bevy of relievers who allowed just one run over the last five innings. Will Smith pitched a perfect seventh for the win.

Atlanta’s scoreless streak in the playoffs ended early in this one when Miguel Rojas homered to the seats in left field to make it 1-all in the second.

Garrett Cooper hit a two-run double to put the Marlins up 3-1 in the third. Brian Anderson followed with an RBI single.

Ozuna doubled with two outs in the inning to score Acuña, and d’Arnaud followed with an RBI double to cut the lead to 4-3.

Right-hander Pablo Lopez will make his postseason debut when he starts for the Marlins in Game 2 against Ian Anderson. Lopez was 6-4 with a 3.61 ERA in 11 starts this season.

Anderson allowed two hits and struck out nine in six scoreless innings to get the win in Atlanta’s win over Reds in Game 2 of the wild card series.