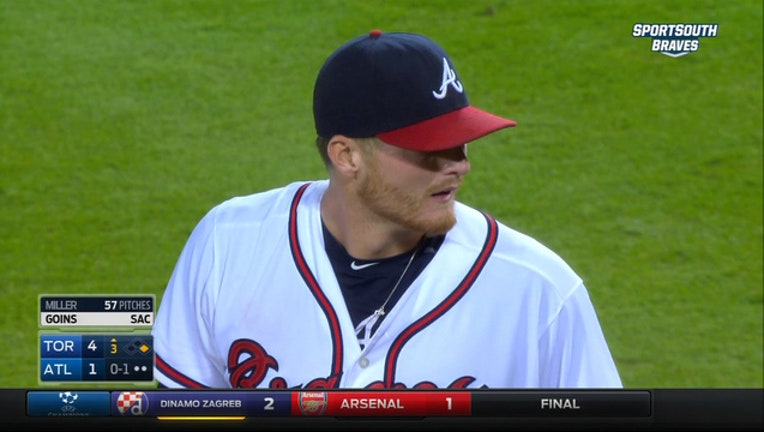 ATLANTA (AP) - Shelby Miller and Matt Wisler gave the Atlanta Braves strong reasons to hope for a better finish in 2016.

Shelby Miller's drought-breaking win made the fourth-place Braves feel like celebrating on the final day of their disappointing season. Then Wisler added to the excitement as he capped his rookie season with his third straight win.

Wisler came within one out of his first shutout as he combined with Edwin Jackson on a four-hitter to beat St. Louis 2-0 and complete a doubleheader sweep on Sunday.

Miller ended his 24-start winless streak in the first game, holding his former Cardinals teammates to three hits through eight innings in a 6-0 win.

Miller's win provided relief that he was able to free himself from the streak.

"As a team, we haven't been this excited in a long time," Braves manager Fredi Gonzalez said.

Miller's drought was the longest in the majors since Chris Volstad's 24-game streak from July 17, 2011 to Aug. 19, 2012. It was the longest streak by a Braves starting pitcher since the team moved to Atlanta in 1966.

"You don't expect to go out there and finish that well," Miller said, adding he couldn't avoid talk of his streak.

"You obviously know what's going on. ... It's fine to put that behind us, absolutely. I'm glad I got a win today and glad we got a win."

"He's pitched some of the best baseball I've ever seen pitched and not get credit for it," Gonzalez said. "We got him the win today and he doesn't have to worry about answering all these questions in spring training."

Miller, who had a 7.11 ERA in five September starts, was acquired from the Cardinals in a December deal that sent outfielder Jason Heyward to St. Louis.

St. Louis was held to seven hits in the doubleheader.

"We hate to lose every game," manager Mike Matheny said.

St. Louis, which won its third straight NL Central title, opens the Division Series at home Friday against the Chicago Cubs or Pittsburgh.

Pinch-hitter Brandon Moss doubled with one out in the ninth to become the Cardinals' first runner in scoring position off Wisler. Jon Jay hit a groundout to first, Tommy Pham walked and Jackson struck out Randal Grichuk to end the game.

Braves: C Ryan Lavarnway started both games because of injuries to catchers Christian Bethancourt (thumb) and A.J. Pierzynski (knee shin). Despite his injury, Pierzynski emerged from the center-field wall during the tool mascot race between the fifth and sixth innings of the second game. He leveled the paint brush and hammer characters with body blocks. Seeing this, the smallest character, "Phil the bucket," turned around and ran back to the start line in the right-field tunnel.