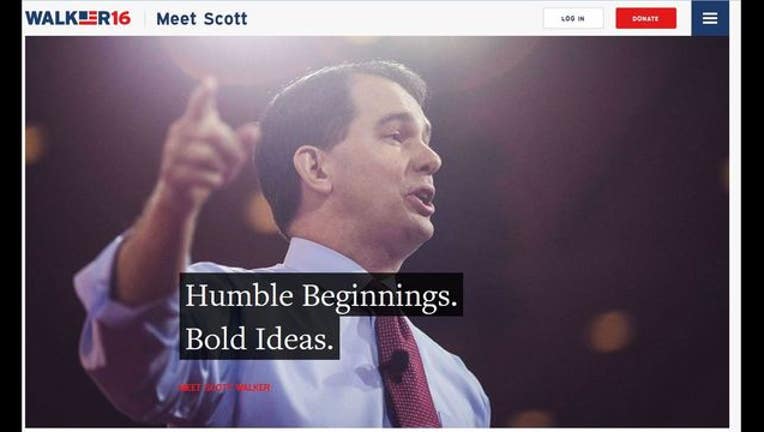 MADISON, Wis. (AP) -- Warning the GOP's presidential race has become too nasty, Scott Walker suspended his 2016 campaign on Monday and called on some of his Republican rivals to do the same, citing an urgent need to "clear the field" to help defeat GOP front-runner Donald Trump.

"Today, I believe that I am being called to lead by helping to clear the field in this race so that a positive conservative message can rise to the top of the field. With that in mind, I will suspend my campaign immediately," Walker said in a Madison press conference.

"I encourage other Republican presidential candidates to consider doing the same so the voters can focus on a limited number of candidates who can offer a positive conservative alternative to the current front-runner," Walker continued. "This is fundamentally important to the future of the party and more importantly to the future of our country."

The announcement marked a dramatic fall for Walker, who was struggling to generate fundraising and enthusiasm after surging into the race's top tier earlier in the year. He will return to his job in Wisconsin as governor, where his term runs through 2018.

One of the last Republicans to enter the race, Walker joined former Texas Gov. Rick Perry as one of the first to leave it, unable to adjust to the popularity of Trump or break out in either of GOP's first two debates. Both candidates warned of the billionaire businessman's influence on the GOP as they exited, although neither called him out by name.

"Sadly, the debate taking place in the Republican party today is not focused on that optimistic view of America. Instead, it has drifted into personal attacks," Walker said. "In the end, I believe that voters want to be for something and not against someone. Instead of talking about how bad things are, we want to hear about how we can make them better for everyone."

Walker's fall was in many ways more dramatic than Perry's.

He was thought to be a leader in the crowded field for much of the year and built a massive national organization with paid staff spread across the country that dwarfed many of his rivals in scale and scope.

"I'm not sure what went wrong," said Iowa state Sen. Mark Costello, who endorsed Walker earlier this year. "I think all the more provocative statements some of the candidates made got them more press.

"I don't think he made any really big mistakes," Costello said, "but people lost enthusiasm."

Walker, 47, tried to appeal to religious conservatives, tea party conservatives and the more traditional GOP base. He tried to cast himself as an unintimidated conservative fighter who had a record of victories in a state that hasn't voted Republican for president since 1984.

Like Perry, however, Walker found little room for such a message in a race dominated by Trump.

The real estate mogul, leading most polls, said he got to know Walker well, saying in a tweet, "he's a very nice person and has a great future."

He came to the race having won election in Wisconsin three times in four years, and having gained a national following among donors and conservatives by successfully pushing his state to strip union bargaining rights from its public workers.

Walker pointed to those Wisconsin wins, in a state that twice voted for Barack Obama as president, as signs that he could successfully advance a conservative agenda as the GOP's White House nominee.

He called himself "aggressively normal" and campaigned on a Harley-Davidson motorcycle, and made a splash in January with a well-received speech before religious conservatives in Iowa.

Groups backing Walker went on to raise $26 million, tapping wealthy donors whom Walker had cultivated in his years as governor and during his successful effort to win a recall election in 2012.

Walker's primary super PAC, called Unintimidated, had just begun spending making a major push in Iowa - reflecting the governor's last-ditch strategy to place all of his chips on that first-to-vote state.

The super PAC told federal regulators in a filing Friday that it had spent more than $1.6 million boosting Walker this year, most recently on a $50,000 mailing to Iowa voters.

But Walker's fall was dramatic. He was unable to adjust to Trump's rise and repeatedly had trouble clearly stating his position on several issues.

He took days to clarify whether he supported ending birthright citizenship. He initially showed interest in building a wall between the U.S. and Canada, only to later laugh it off as ridiculous. Walker also declared he wasn't a career politician, despite having held public office for 22 straight years.

After Trump, Ben Carson and Carly Fiorina displaced Walker at the top of the polls, Walker took a more aggressive approach, promising to "wreak havoc" on Washington. He vowed to take on unions as president, just as he did as Wisconsin governor, outlawing them for federal government workers and making the entire country right-to-work.

But the anti-union policy proposal fell flat; announced in the days before the second GOP debate, it wasn't mentioned at all - by Walker or anyone else - on stage.

He has yet to report fundraising totals to federal regulators, but top fundraisers and donors have said his plummeting poll numbers left them struggling to generate cash.

Walker called his senior staff to the governor's mansion in Madison on Monday to review recent polling, in which he was mired at the bottom of the GOP field, and his campaign's finances.

"I'm disappointed," said Stanley Hubbard, a billionaire media mogul from Minneapolis who had backed Walker's campaign. "He's a good man and would have been a good president."

As word spread of his decision to exit the race, Republican operatives in Iowa working for other campaigns were already making plans to contact state lawmakers who had committed to support Walker.

The Wisconsin governor had assembled a campaign organization in every one of Iowa's 99 counties and had a number of state lawmakers committed to him.

He said he knew about three days ago that "it was over" and had been discussing an endorsement of Rubio as of Monday morning, before Walker's announcement became official.

"It was personally hard, but you know when it's over. I knew when it was over," Hurst said. "I'm smart enough to know that when you are (at) less than 1 percent that you've not going to get any money."

Walker, one of the most divisive political figures in Wisconsin history, will have some work to do repairing his relationship with voters in his home state. His job approval ratings fell dramatically during his presidential run, hitting their lowest mark ever of 39 percent in an August poll conducted by Marquette University.

Wisconsin state Assembly Speaker Robin Vos, a Republican and close ally of Walker's, said he "has an amazing story to tell about Wisconsin and the reforms we put into place."

But Vos said he suspects Walker realized he would have had a difficult time taking attention away from other candidates, like Trump, who are "sucking up a lot of the oxygen."