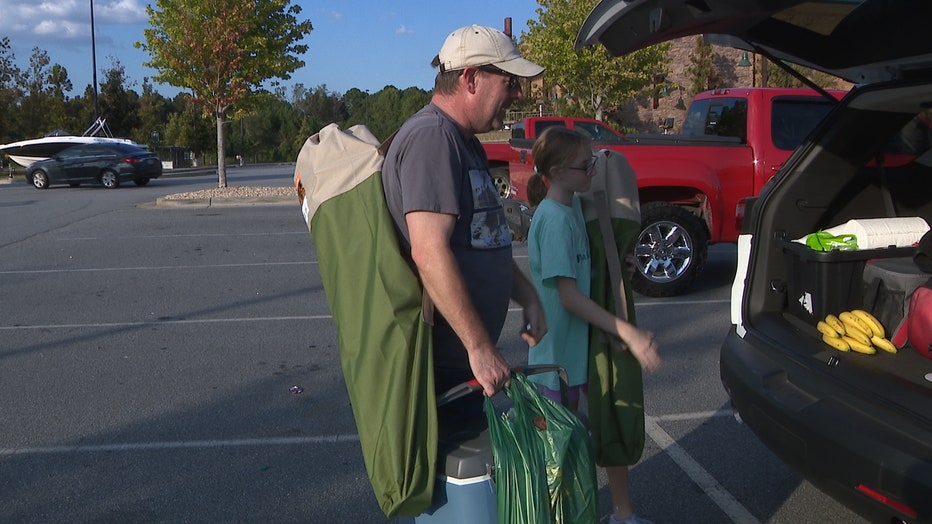 ACWORTH, Ga. - With the extended drought Georgia has been having, wildfire dangers are at their worst in years.

In response, Georgia’s Forestry Commission and the US Forest Service are dispatching special teams to talk fire safety to the public. Residents might run into them at an outdoor store like Cabela’s in Acworth or even at a campsite in the great outdoors.

“You got all this stuff in here and oh man we left the camping chairs at home,” said Stuart Cheatham who was at Cabela’s in Acworth.

Cheatham and his daughter Avery were getting last minute supplies as they head to their favorite campground where fire danger is very real. They also got a lesson in fire safety from US Forest Service and Georgia Forestry Commission members informing people at campgrounds, community centers and stores like Cabela’s.

“The fuels are very dry, very volatile, very flammable, so the right spark in the wrong place could cause problems,” said Mark Wiles, with the Georgia Forestry Commission.

He’s was talking about wildfire problems like north Georgia experienced in the fall of 2016 when tens of thousands of acres burned.

“We’re actually drier now than we were in 2016 when we had the major fires here in northwest Georgia and northeast Georgia as well,” said Wiles.

Don’t be surprised to see a familiar face with fire safety teams, Smokey the Bear. He’s been a wildfire prevention icon for 75 years who is necessary in north Georgia, at the moment, as thousands like the Cheathams head to the great outdoors.

“Well first of all it’s this hot I’m not building a fire anyways,” said Stuart Cheatham.

Wiles described that year as the perfect storm for wildfires.

Wiles encourages everyone who makes a campfire to keep it in a contained area, to make sure the fire is doused completely and to always keep water nearby the campfire.