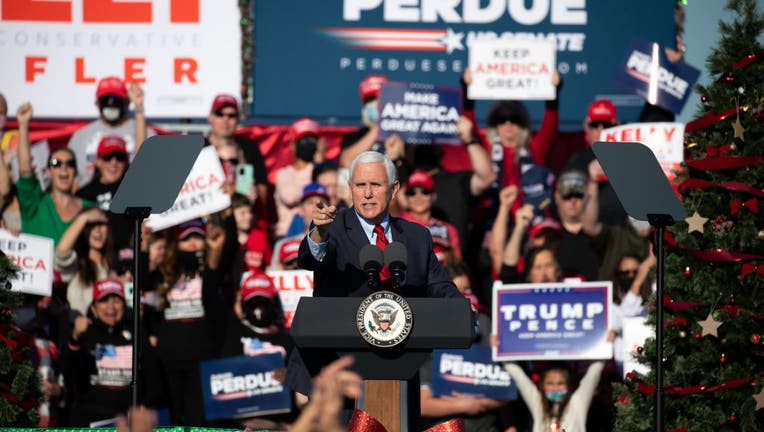 Vice President Mike Pence speaks to the crowd during a rally in Augusta, Georgia.

COLUMBUS, Ga. - Vice President Mike Pence will return to Georgia for a rally supporting the Republican candidates in the Georgia January Senate runoffs.

The Senate runoffs — which became necessary when no candidate received a majority of the votes in November — have put Georgia squarely in the national political spotlight, as they will determine the balance of power in Washington at the outset of Democrat Joe Biden’s presidency. Both major parties and activist groups are plowing tens of millions of dollars into the state ahead of Jan. 5, when Perdue and Loeffler bid to hold off Democrats Jon Ossoff and Rev. Raphael Warnock, respectively.

Republicans need one victory to maintain their Senate majority. Democrats need a Georgia sweep to force a 50-50 Senate and position Vice President-elect Kamala Harris as the tiebreaking vote. Highlighting the importance of the race, Biden visited the state Tuesday to campaign for Ossoff and Warnock.

Pence has previously visited the state several times to rally electoral support for the state’s two Republican senators, telling voters at a rally in August last week that "We will win Georgia and save America.”

In a release about the rallies, the Georgia Republican Party said that Pence would focus on the accomplishment of the Trump Administration and Senate Republicans and emphasize "the importance of fighting for conservative legislators."