The White House says President Joe Biden is setting a new vaccination goal to deliver at least one dose to 70 percent of adult Americans by July 4.

WASHINGTON - President Joe Biden on Tuesday announced a new target of 70% of American adults receiving at least one dose of a COVID-19 vaccine, and 160 million fully vaccinated, by the Fourth of July.

"That means giving close to 100 million shots — some first shots, others second shots — over the next 60 days," Biden said during remarks from the White House.

The Biden administration is in a "new phase" as it seeks to make it easier for people to get shots amid waning demand. Biden called for states to make COVID-19 vaccines available on a walk-in basis and said he will direct all federal pharmacy partners to do the same.

The government has also launched a website — vaccines.gov — to help Americans find a vaccine nearest to them and make an appointment. Individuals can also text their zip code to 438829 to find a nearby location with availability.

"Send this to your kids, your grandkids or your friends who have not been vaccinated yet," Biden said of the new website and text program. 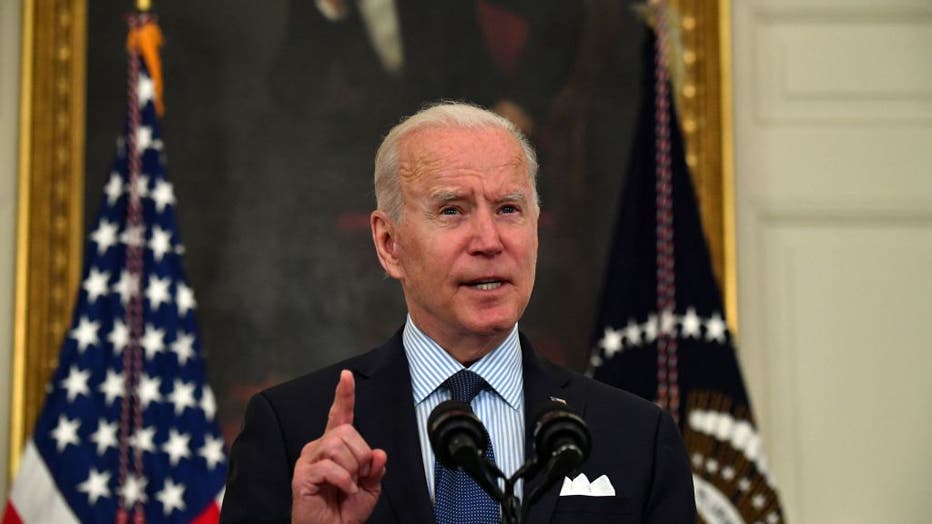 President Joe Biden speaks about the COVID-19 response and the vaccination program in the State Dining Room of the White House on May 4, 2021. (Photo by NICHOLAS KAMM/AFP via Getty Images)

For the first time, his administration is also moving to shift doses from states with weaker demand to areas with stronger interest in the shots. The average number of doses given per day fell 27% from a high of 3.26 million on April 11 to 2.37 million last Tuesday, according to the U.S. Centers for Disease Control and Prevention.

Some states have even turned down part or all of their weekly allotments. The White House said those states would have the shots available whenever demand for vaccines in their states increases — a key priority of the Biden administration.

State governors were informed of the change by the White House Tuesday morning, according to the AP.

This week, Iowa turned down nearly three-quarters of the vaccine doses available to the state amid low demand. It marked the second consecutive week that the state asked the federal government to withhold allocated doses, the Des Moines Register reported.

Arkansas also recently turned down its entire weekly supply from the government.

"Obviously we have a challenge with vaccine hesitancy and I think that hesitancy in Arkansas is partly because the threat is perceived to be down," Arkansas Gov. Asa Hutchinson said last week, according to KSLA-TV.

Individual states have made similar shifts internally to account for changing demand. Last week, Washington state changed the way it allocates coronavirus vaccine to its counties. Previously the state doled out supplies to counties proportionate to their populations. But Gov. Jay Inslee said Thursday that the amounts now will be based on requests from health care providers.4

Nationwide, more than 56% of U.S. adults have received at least one dose of a COVID-19 vaccine, and nearly 41% of American adults are fully vaccinated against the virus, CDC data shows.

"The light at the end of the tunnel is actually growing brighter and brighter," Biden said during his remarks. "We need you to bring it home. Get vaccinated. In two months, let’s celebrate our independence as a nation and our independence from this virus."

The vaccine developed by Pfizer-BioNTech, one of three currently being administered in the U.S. and authorized for those 16 and older, has been found to offer protection for young people ages 12 to 15. The FDA is expected to expand its emergency use authorization for Pfizer’s vaccine for those 12 and older by early next week, according to the Associated Press.

The president said the administration is also focused on preparing adolescents in the U.S. to get vaccinated, pending an FDA authorization.

"The FDA and the FDA alone will make that decision. But today I want American parents to know, if that announcement comes, we are ready to move immediately," Biden said. He added that the White House will make 20,000 pharmacy sites nationwide ready to vaccinate younger people with the aim of getting them fully vaccinated by the start of the next school year.

The vaccines will also be shipped directly to pediatricians, "so parents and their children can talk to their family doctor about it and get the shot from a provider they trust the most," the president said.

While younger people are at dramatically lower risk of serious complications from COVID-19, they have made up a larger share of new virus cases as a majority of U.S. adults have been at least partially vaccinated and as higher-risk activities like indoor dining and contact sports have resumed in most of the country. Officials hope that extending vaccinations to teens will further accelerate the nation’s reduced virus caseload and allow schools to reopen with minimal disruptions this fall.

While the country’s swift vaccination campaign this year has sent new cases and deaths tumbling, it has also prompted an ease on restrictions and an uptick in air travel.

In the U.S., the average number of new cases per day fell below 50,000 for the first time since October. And nearly 1.67 million people were screened at U.S. airport checkpoints on Sunday, according to the Transportation Security Administration, the highest number since COVID-19 took hold in mid-March of last year.

Florida Gov. Ron DeSantis signed legislation giving him sweeping powers to suspend all local emergency measures put in place during the outbreak. The law doesn’t go into effect until July 1, but the Republican governor said he will issue an executive order to more quickly get rid of local mask mandates.

"My message is that the vaccines protect you. Get vaccinated, and then live your life as if you are protected," DeSantis said, according to FOX 13 Tampa Bay.

In Las Vegas, casino capacity limits were raised Saturday to 80%, while person-to-person distancing was dropped to 3 feet. Masks are still required.

Los Angeles County reported no coronavirus deaths on Sunday and Monday, some of which may be attributable to a lag in reporting but was nevertheless a hopeful sign that could move the county to allow an increase in capacity at events and venues, and indoor service at bars.