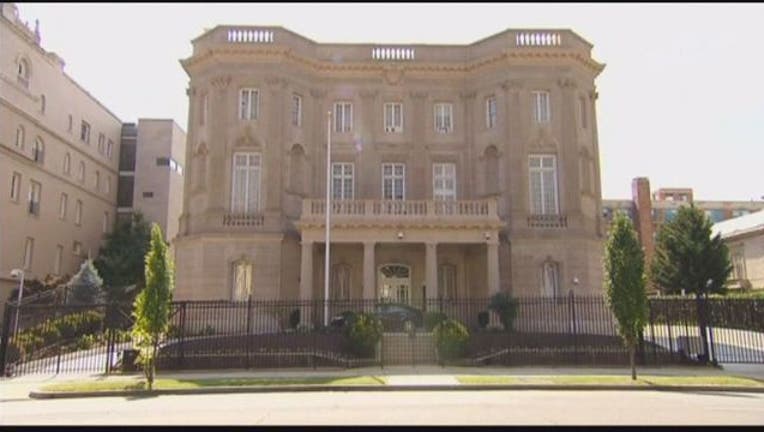 WASHINGTON - (AP) -- The United States expelled 15 of Cuba's diplomats Tuesday to protest its failure to protect Americans from unexplained attacks in Havana, plunging diplomatic ties between the countries to levels unseen in years.

Only days ago, the U.S. and Cuba maintained dozens of diplomats in newly re-opened embassies in Havana and Washington, powerful symbols of a warming relationship between longtime foes. Now both countries are poised to cut their embassies by more than half, as invisible, unexplained attacks threaten delicate ties between the Cold War rivals.

The State Department gave Cuba's ambassador a list Tuesday of 15 names and ordered them out within one week, officials said, in a move that aims to "ensure equity" between each nation's embassy staffing. Last week, the U.S. announced it was withdrawing 60 percent of its own diplomats from Havana because they might be attacked and harmed if they stay.

The dual moves marked a sharp escalation in the U.S. response to attacks that began nearly a year ago and yet remain unexplained despite harming at least 22 Americans -- including a new victim identified this week.

Still, U.S. officials emphasized they were not accusing Cuba of either culpability or complicity, merely a failure to stop whatever is happening to Americans working out of the U.S. Embassy in Havana.

Investigators continue exploring the possibility of a "sonic attack" harming diplomats through sound waves, but have discovered no device and identified no culprit.

"We continue to maintain diplomatic relations with Cuba, and will continue to cooperate with Cuba as we pursue the investigation into these attacks," said Secretary of State Rex Tillerson.

Cuba's Embassy in Washington did not respond to multiple requests for comment. President Raul Castro's government denies involvement in the attacks, and is likely to view the move as unwarranted retaliation.

The U.S. also disclosed that the scope of the attacks has continued to grow, with a 22nd victim confirmed on Monday. In recent weeks the State Department had said there were 21 individuals "medically confirmed" to be affected by attacks that harmed their hearing, cognition, balance and vision, some with diagnoses as serious as brain injury.

The additional victim was attacked in January but wasn't confirmed to have been affected until symptoms prompted a new medical re-evaluation, said the State Department official, who briefed reporters on a conference call on condition of anonymity.

Both the U.S. and Cuba will see their diplomatic staffing in their embassies drop to the lowest levels in years.

Before full diplomatic relations were restored in 2015, Cuba had about two-dozen accredited staffers at what was then the Cuban interests section, according to a State Department list. That number at times climbed as high as more than 50, and the latest edition of the U.S. "Diplomatic List" identifies 26 accredited Cubans at the embassy, almost all accompanied by spouses.

The removal of 15 will reduce the Cuban staffing to roughly a dozen accredited diplomats.

In Havana, the U.S. had roughly 54 diplomats in its embassy until deciding Friday to pull more than half of them out and leave behind only "essential personnel." The departing Americans are expected to have all left Cuba by week's end, officials said.

The Cuban diplomats being expelled will not be deemed "persona non grata," officials said, a designation that would prevent them from ever returning to U.S. soil. The government often uses that designation to expel suspected foreign spies and ensure they can't come back.

Lawmakers who had called on the Trump administration to expel all of Cuba's diplomats applauded the move Tuesday. Sen. Marco Rubio, a Florida Republican and vocal critic of Castro's government, called it "the right decision" in a Twitter post.

Yet U.S. officials said the goal wasn't to punish the communist-run island, but to ensure both countries have a similar number of diplomats in each other's capitals.

Tensions between the two neighbors have been escalating amid serious U.S. concern about the unexplained attacks.

On Monday, The Associated Press reported that U.S. spies were among the first and most severely affected victims. Though bona fide diplomats have also been affected, it wasn't until intelligence operatives, working under diplomatic cover, reported bizarre sounds and even stranger physical effects that the United States realized something was wrong, several individuals familiar with the situation said.

The mysterious "health attacks" started within days of President Donald Trump's election in November, the AP has reported.

Delivering a one-two punch to U.S.-Cuba relations, the U.S. last week also delivered an ominous warning to Americans to stay away from Cuba, a move that could have profound implications for the island's travel industry. The U.S. said that since some workers had been attacked in Havana hotels, it couldn't assure Americans who visit Cuba that they wouldn't suffer attacks.

"Because our personnel's safety is at risk, and we are unable to identify the source of the attacks, we believe U.S. citizens may also be at risk and warn them not to travel to Cuba," the United States said in a formal travel warning.

To medical investigators' dismay, symptoms have varied widely. In addition to hearing loss and concussions, some people have experienced nausea, headaches and ear-ringing. The AP has reported that some now suffer from problems with concentration and common word recall.

The incidents stopped for a time. They recurred as recently as late August.