LOS ANGELES - After publishing a study conducted in conjunction with the U.S. Department of Defense on exposure to the novel coronavirus on flights, United Airlines announced that the risk of such exposure aboard their aircrafts is “almost non-existent,” but some experts say that the claim could be misleading.

That is, if you wear a face mask.

Using a mannequin, researchers ran 300 aerosol release tests in order to replicate breathing and coughing. During each test, approximately 180 million particles were released, which study authors said simulated the number of particles that thousands of coughs would produce.

After studying the particle movement within the cabin with and without a face mask, researchers found that “approximately 99.99% of particles were filtered out of the cabin within six minutes due to fast air circulation, downward air ventilation and efficient filtration systems on the plane.”

“When a passenger is seated and wearing a mask, on average only 0.003% of infected air particles could enter their breathing zone, even when every seat on the plane is occupied,” a United Airlines spokesperson said. 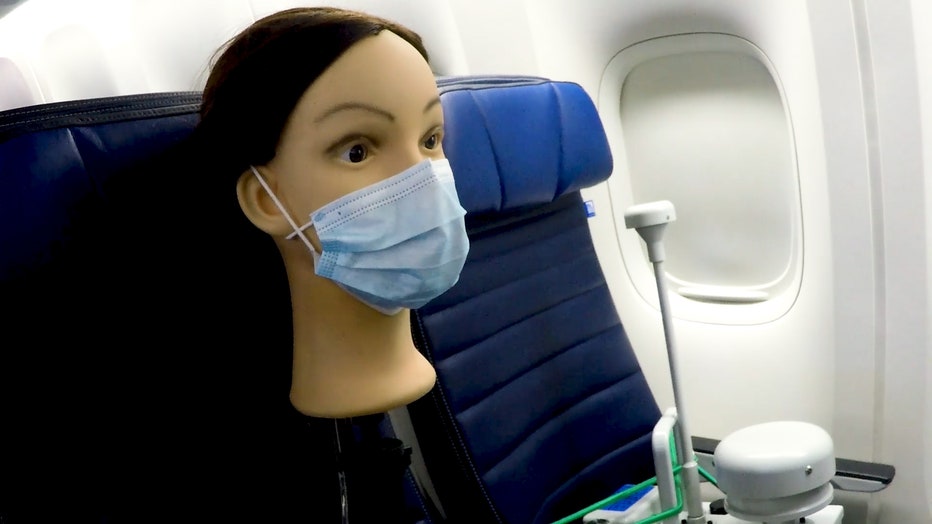 Mannequin's were used to replicate breathing and coughing.

The study comes as United — and other airlines — work to claw their way out of a financial disaster caused by the coronavirus pandemic.

The airline said Wednesday that revenue plummeted 78% from a year earlier. The loss was worse than analysts had expected.

Airlines in general are trying to lure passengers back by requiring face masks, stepping up their cleaning of plane cabins, and citing industry claims that transmission of the new coronavirus on flights is rare. Some, like Delta and Southwest, leave middle seats open to put more space between passengers. United and American do not.

Face masks have been widely endorsed by medical experts to have a substantial impact on the spread of viruses like the novel coronavirus, which are most commonly spread through respiratory droplets in the air.

In June, Dr. Richard Davis, who is the clinical microbiology lab director at Providence Sacred Heart Medical Center in Spokane, Washington, tweeted a series of photos that showcased two demonstrations aimed at understanding how effective face masks are at blocking respiratory droplets emitted from an individual’s mouth.

Using a standard triple-layer hospital issue surgical mask, Davis sneezed, sang, talked and coughed toward an agar culture plate with and without a mask.

Agar culture plates are Petri dishes filled with agar, a gelatinous substance obtained from red algae to culture, or help multiply, microorganisms. After performing each action, Davis said bacteria colonies formed in the dishes where the respiratory droplets emitted from his mouth landed.

“Bacteria colonies show where droplets landed. A mask blocks virtually all of them,” Davis wrote in a caption for the post.

But while facial coverings are demonstrably effective in limiting exposure to a coronavirus like the one that causes COVID-19, some experts say that United asserting that masks make potential exposure in an aircraft setting virtually “non-existent,” could be somewhat misleading.

Dr. Linsey Marr, a professor at Virginia Tech with expertise in airborne transmission of viruses and air quality, said that while United’s study was comprehensive, it did not account for all of the variables that could contribute to COVID-19 spread within an aircraft. 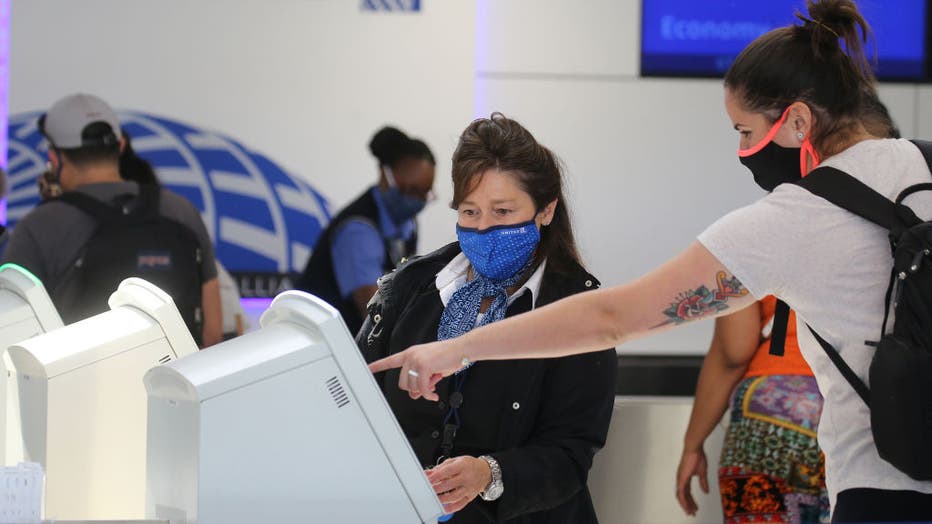 “The study was really comprehensive, the best set of experimental data that I’ve seen on an actual plane,” said Marr.

Speaking on the logistics of the study, Marr said, “They concluded that it was safe. I will say that it was very low-risk, but there are some assumptions to consider that were relevant to how they did the experiment.”

“The rate of emissions that they assumed, the amount of viruses that people are releasing into the air, was consistent maybe with breathing, but not with talking, with talking we would expect there to be 10 times more. So, in that case, the risk could be 10 times higher,” Marr said.

Marr added that the study might not account for practical social interactions that regularly occur on flights.

“They assume that the person sitting there facing forward, of course if they turn their head a little bit, that’s going to make things very different for the person they’re sitting next to,” she said.

Marr explained that the study only considered aerosols — the suspension of particles in air — rather than large droplets that are emitted when people cough or talk.

Marr said larger droplets can fly and land directly on surfaces — including someone’s eyes, nose or mouth — and are “not affected by ventilation.”  Marr added that the results of the study make her “more comfortable about just sitting on the plane as long as people aren’t moving around and talking.”

All these factors should be considered even when masks are worn. Marr said that eventually, passengers will take off their masks to eat and drink, thus elevating the risk for other passengers.