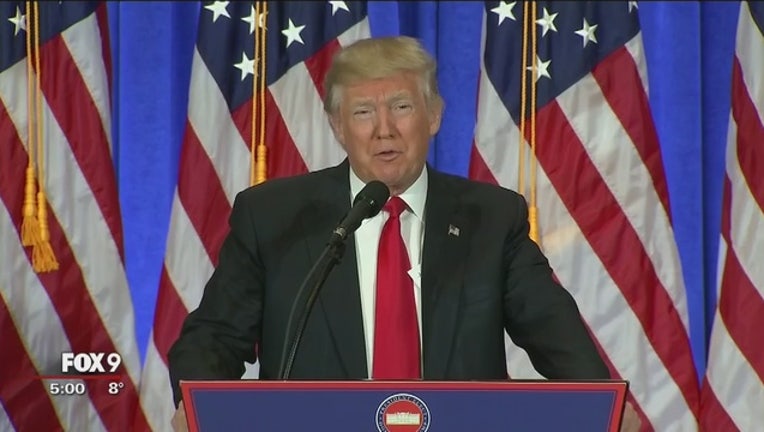 WESTMINSTER, Calif. (AP) - The week after Donald Trump was elected president, Dr. Mai-Phuong Nguyen and two dozen other Vietnamese-Americans active in liberal causes gathered in a circle of folding chairs, consoling one another about an America almost beyond comprehension.

Now, days before Trump takes the oath of office, Nguyen sits in a restaurant booth in Orange County's neon-lit Little Saigon and studies perhaps the most confounding face of the divide exposed by the election - her father's.

Here in a county transformed by waves of newcomers, the elder Nguyen - a government translator airlifted from South Vietnam with his family in 1975 as Communist forces pressed in on the capital - built a new life as a record-setting life insurance salesman, watching people strive and struggle.

"And I know a lot of people out there sit there and wait for welfare," he says, explaining his hopes that Trump will rein in such spending and create jobs.

"But he is trying to prevent other people from coming in and enjoying some of the same things you came here for, Dad," says his daughter, a 47-year-old physician who pushed for health care reform and fears Trump will take away the medical coverage it extended to millions of Americans. "If he does wrong, are you going to support him?"

Their disagreement is a reminder that for Orange County, just as for the rest of the country, there has never been a moment quite like this one.

When Hillary Clinton won this county of 3.2 million in November, it marked the first time the OC had backed a Democrat for president since Franklin Roosevelt. Best known for Disneyland, and long a hothouse of conservatism in a blue state, it was the largest county in the country to flip.

The shift was expected eventually. Orange County's citrus groves turned to tract housing decades back to welcome a mostly white influx from Los Angeles and Midwestern states. Today, though, Santa Ana's quinceanera shops reflect a county that is a third Latino. One in five Orange Countians is Asian.

The hopes and anxieties stirred by Trump's inauguration spotlight even more complicated tensions.

Most Vietnamese traditionally voted for Republicans, viewed as opponents of communism. But many of their adult children, also refugees, see Trump as rejecting American ideals and people like them.

Local Republicans, who once embraced the John Birch Society and recently erected a statue of Ronald Reagan in the park where he launched two White House bids, long espoused a muscular conservatism. Most voted for Trump, but not without soul-searching.

At Jimmy Camp's house, a "No Trump" sign made by Camp's son still hangs in the window. Heading out to feed his family's goat and potbellied pig, Camp recalls his start in Republican politics three decades ago - knocking on doors for candidates to earn cash.

Camp played guitar in a rock band then and embraced platforms calling for government to stay out of people's lives. He'd always loved the outdoors in a county that stretches from the ocean to the Santa Ana Mountains. After meeting county native Richard Nixon, he read up on the disgraced president's often forgotten chartering of the Environmental Protection Agency.

Camp became one of the state's busiest Republican political consultants. Then, last summer he emailed fellow Republicans, renouncing his party membership because of his disgust with Trump.

"If you go through and look at everything Jesus said in the Bible, this guy is opposite of it," says Camp, 52, a pastor's son.

Camp, who has friends from Iran and Egypt, cringes at a president who would castigate Muslims as supposedly tied to terrorists, though he doubts Trump will fulfill his most extreme rhetoric.

"I hope he doesn't drive us off a cliff," Camp says. "I hope that we survive the next four years. I think we will."

Others voice confidence in Trump.

Gloria Pruyne says her family had reservations about Trump's morality early on. But the conservative activist ended up knocking on more than 500 doors to get out the vote. Now Pruyne, 78, says she wants Trump to install a conservative Supreme Court justice, revoke an Affordable Care Act she blames for a $500 increase in her family's monthly insurance bill, and back Israel.

"We're looking forward to a radical change with this president," she says.

With the inauguration approaching, Ron Brindle has no plans to remove the 5-foot-square portrait of Trump from his oil well fronting a main road in Huntington Beach. Brindle bought this land for his tree nursery business more than 40 years ago. Today, it is surrounded by tract homes, many owned by Asian families.

"Now I don't have anything against any of them, but what happened to the country?" Brindle says.

The first thing Trump should do, he says, is close the border so Americans no longer have to foot the bill to care for foreigners. But Brindle also hopes that Trump will reach out to skeptics.

Steven Mai is ready to listen. Mai, a 42-year-old registered Republican, rejected Trump for criticizing the Muslim parents of a slain American soldier.

But Trump will be his president, Mai says.

Still, if Trump really wants to lead, he should come to places like Orange County, says Mai's wife, Tammy Tran. He could work in a sandwich shop for a few hours, or see what it's like to care for an elderly person. Maybe then, the couple say, Trump will understand his responsibility to the many Americas.

"I just hope he's going to be the president that my parents were thinking," Mai says. "If he can be a good president, then we all benefit."