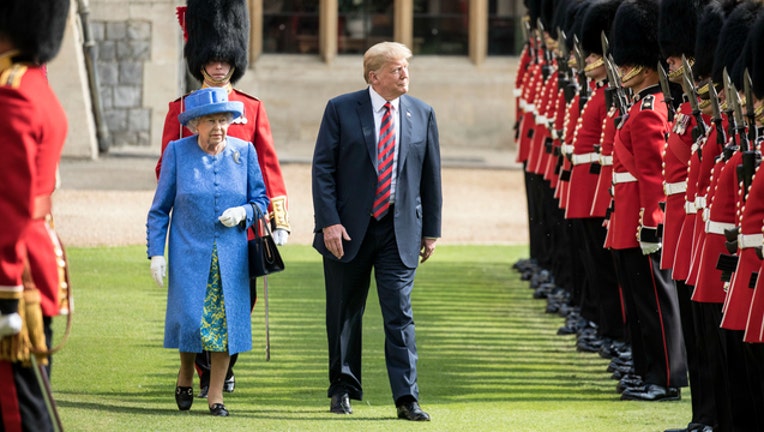 WASHINGTON (AP) - It's a unique odd couple: A 93-year-old sovereign who has made a point of keeping her opinions to herself during her long reign is hosting a 72-year-old reality TV star-turned-president who tweets his uncensored thoughts daily to 60 million followers.

For Queen Elizabeth II, Britain's unflappable monarch, the arrival of U.S. President Donald Trump, his family and his armored entourage on Monday means a full day of ceremony and toasts topped by a magnificent banquet at Buckingham Palace.

Yet beneath the pomp and ceremony, there are differences aplenty.

There will be a formal tea Monday afternoon hosted by Prince Charles and his wife Camilla for Trump and first lady Melania Trump, which brings together a future king who has warned about the perils of climate change for years with a president who is actively dismantling U.S. policies designed to slow global warming.

On the political front, Trump meets Tuesday with British Prime Minister Theresa May only days before she steps down Friday as Conservative Party leader, kicking off a race to succeed her as prime minister.

Trump professes friendship for May, but he has been harshly critical of her handling of Britain's tortured Brexit negotiations with the European Union. He has also buddied up to former Foreign Secretary Boris Johnson, a May critic who hopes to follow her into power, and Brexit Party leader Nigel Farage who accuses May of incompetence and betrayal.

Trump ramped up his interference in British politics by telling the Sunday Times that Britain should "walk away" from talks and refuse to pay a 39 billion pound ($49 billion) divorce bill if it doesn't get better terms from the EU. He also said Farage should be given a role in the Brexit negotiations.

Officials on both sides of the Atlantic say the long-delayed state visit will celebrate the vaunted "special relationship" between Britain and the U.S. It was timed to coincide with solemn ceremonies in Britain on Wednesday and in France on Thursday marking the 75th anniversary of the D-Day invasion.

Still, the very topic of a Trump visit to Britain has been deeply divisive since May extended the invitation on behalf of the queen in an Oval Office visit in the first week of Trump's administration. The move prompted street protests in Britain, an online petition signed by more than 1 million opposed to the idea, and a debate in Parliament over whether Trump deserved the highest honor that Britain can bestow on a foreign leader.

London Mayor Sadiq Khan wrote in The Observer Sunday that Trump's presidency is part of a sinister worldwide trend. He said Trump should not get red-carpet treatment during his visit.

"President Donald Trump is just one of the most egregious examples of a growing global threat," said Khan, a frequent Trump target. "The far right is on the rise around the world, threatening our hard-won rights and freedoms and the values that have defined our liberal, democratic societies for more than 70 years."

Ever before Trump was elected president, there was a highly charged debate in Britain's Parliament over whether to ban him from coming to the U.K. because of his harsh comments about temporarily banning Muslims from entering the United States. His brief working visit to Britain last summer generated huge protests in the streets of London even as Trump stayed -- literally -- above the fray by relying on a helicopter to get around.

That July visit also marked the debut of the "Trump baby balloon," an inflatable piece of conceptual art that depicts the president as a baby wearing diapers.

At the time, Labour Party lawmaker David Lammy tweeted that Trump was a "racist" who hates the fact that Londoners elected Khan as its first Muslim mayor. Lammy said Trump "does not deserve to meet our queen."

Much of this visit will be given over to social events and to the D-Day commemorations, but some serious topics are to be discussed, including the Trump administration's determined effort to prevent Britain from relying on Chinese tech giant Huawei to build parts of its 5G communications network.

National Security Adviser John Bolton told reporters before Trump's arrival that allowing this could give China's government a "back door" into western telecommunications systems.

A state visit is a relatively rare honor for a U.S. president: Only Barack Obama in 2011 and George W. Bush in 2003 have received the coveted invitations, which are offered based on advice from British Foreign Office officials, not the whim of the queen.

She has, however, met 12 of the 13 U.S. presidents during her 67-year reign, which is now the longest in British history. The only exception was Lyndon Johnson.

Some of the traditional trappings of an official state visit are likely being scaled back.

Usually a horse-drawn carriage procession brings the visiting dignitary to the grounds of Buckingham Palace, escorted by mounted soldiers from the Household Cavalry as gun salutes are fired from Green Park and the Tower of London. Officials have not said whether that will happen this time, possibly due to security concerns.

The president and first lady are not going to stay at Buckingham Palace, where state visitors usually lodge, apparently because of renovations underway at the queen's 775-room official residence. They are expected to stay at Winfield House, the spacious home of the U.S. ambassador to Britain.

Meghan, an American former actress who has campaigned for increased women's rights, was critical of Trump and backed his political rival Hillary Clinton before she married into Britain's royal family. She has not resumed her official duties since giving birth four weeks ago.