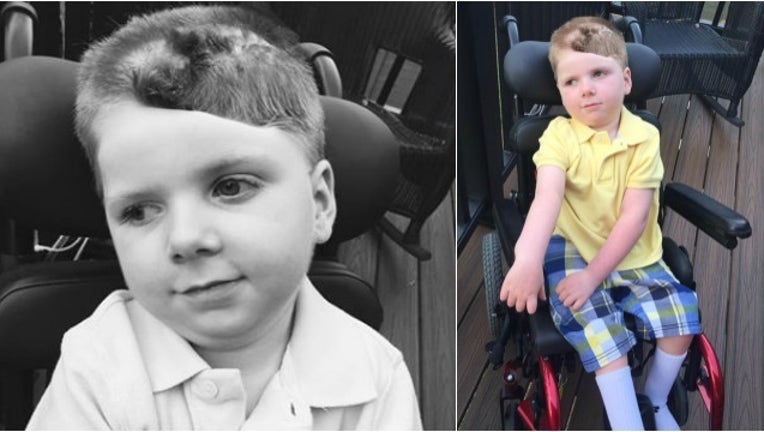 JEFFERSON, Ga. - Tripp Halstead is headed to the beach with his family for Spring Break before he undergoes skull surgery in less than two weeks.

Thursday, Stacy Halstead shared pictures on Facebook of her 5-year-old son's new haircut. In a touching post, she said she asked for it to be cut as short as possible for a few reasons.

"They are going to shave his head for the surgery in two weeks so I figured this would make it easier on them," Stacy said. "I wanted a few pictures of how deep his dent is to remember it. It will be gone soon. Not sure why that makes me sad. It's just part of him now."

Stacy also said having it shorter is better for their beach trip.

"That hair collects sand like nobody's business," she added.

Tripp was critically injured in October of 2012 when a tree limb fell on him outside his Winder day care center. He suffered severe brain injuries in the accident.

Tripp's April 13 surgery will include getting a plate put in his head. His mother described it as "some kind of stretchable plastic" that you shouldn't be able to see and will grow with him. She said she's not sure if this will help him get better, but said it shouldn't make him worse.

"I am in awe of the young man he has become. So tall, so handsome, so strong. He is coming up on his 21st surgery I think and he has always surpassed the doctors' expectations," Stacy said on Tuesday.

The Halsteads said they are expecting a tough summer, but Tripp's a tough little boy. Following his skull surgery, he'll undergo spine surgery on June 30.

In the meantime, they plan on having some fun in the sun on Spring Break! Follow Tripp Halstead Updates on Facebook for more.