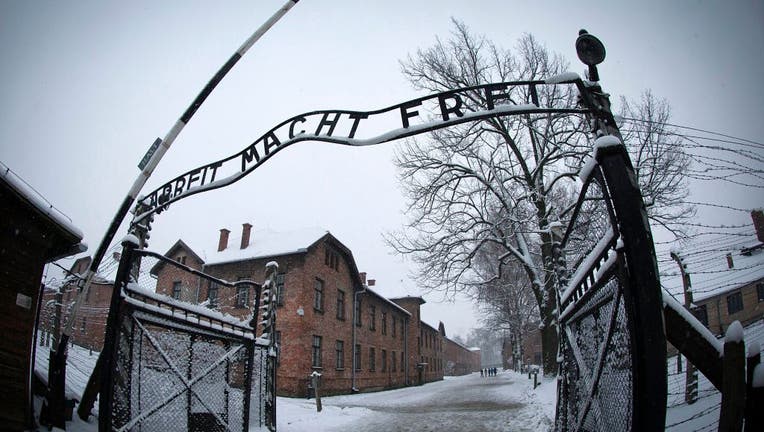 The entrance to the former Nazi concentration camp Auschwitz-Birkenau with the lettering 'Arbeit macht frei' ('Work makes you free') is pictured in Oswiecim, Poland. (JOEL SAGET/AFP via Getty Images)

A nationwide survey of Millennials and Generation Z revealed that young Georgians may have a lack of basic knowledge about the Holocaust.

The survey on Holocaust knowlege, which was done by the Conference on Jewish Material Claims Against Germany, found that the Georgians surveyed had one of the lowest "Holocaust Knowledge Scores," in the nation, which is defined as "1) have 'Definitively heard about the Holocaust,' and 2) can name at least one concentration camp, death camp, or ghetto, and 3) know that 6 million Jews were killed in the Holocaust."

Nationally, the survey found that 63 percent of the Millenials and Gen. Z people surveyed did not know that 6 million Jews were murdered, with 36 percent thinking that “two million or fewer Jews” were killed.

In Georgia, 15 percent of respondents said that they believed that the Holocaust was caused by Jewish people, 62% did not know that 6 million Jews were killed, and over half could not name either a concentration camp or ghetto.

The other states with the lowest Holocaust Knowledge Scores found in the survey were Alaska, Delaware, Maryland, New York, Hawaii, Louisiana, Florida, Mississippi, and Arkansas.

“The results are both shocking and saddening and they underscore why we must act now while Holocaust survivors are still with us to voice their stories,” said Gideon Taylor, president of the Conference on Jewish Material Claims Against Germany. “We need to understand why we aren’t doing better in educating a younger generation about the Holocaust and the lessons of the past. This needs to serve as a wake-up call to us all, and as a road map of where government officials need to act.”

Data for the survey was collected from a sample of 1,000 interviews nationwide, with 200 interviews in each state with adults between the ages of 18 to 39.