Henry County Police say it happened at the Waffle House on Highway 155 in Stockbridge Wednesday morning.

Bralynn Cochren, one of the employees, said a man walked into the restaurant at 4:17 am and sat down at the table. She said a second man walked in just several seconds after.

"I turned around for a second and the next you know, someone comes in and has a gun pointed at me," Cochren said.

Cochren said the man patted her and her coworker down, took cash out of the register and took their purses and cell phones.

"I just knew in my head to give them everything they wanted," Cochren said.

The man then demanded something else from Cochren.

"Then, he had me by gunpoint and take him to the back where the safe was and he tried to unlock the safe," Cochran said.

The man was unable to unlock the safe. Cochren said the man held the gun up to her again and told her to get down on the ground.

The two men walk out one after another at 4:20 am.

Cochren said she called the police as soon as she knew it was safe.

Henry County Police are now searching for the two men. 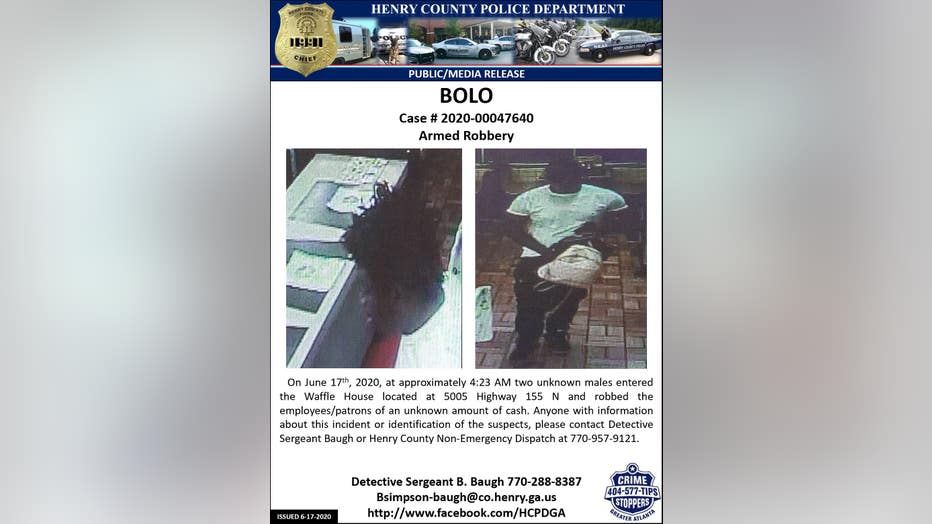 Cochren said she's thankful she and her coworker managed to escape this ordeal unharmed.

Please call the police if you recognize the men or have any information.