Sheriff Reginald Scandrett announced that the NBA legend will serve as the department's director of community relations.

HENRY COUNTY, Ga. - Shaquille O'Neal said he has always wanted to be a sheriff and now the NBA legend has officially taken a role at the Henry County Sheriff's Office.

Friday, newly-elected Sheriff Reginald Scandrett announced he has named O'Neal as his director of community relations.

"As we build this team and if I can use the NBA as a reference point, you've got to always make sure you have the right big man," said Sheriff Scandrett. "I believe and know that we have one of the best big men in the business."

The sheriff said his goal is for O'Neal is to help improve the relationships between law enforcement and the Henry County community.

SEE ALSO: Shaq pays for family's laptop at Best Buy after giving condolences for his sister and Kobe Bryant

"This is a very specific, strategic plan that's going to be fluid along the way and we're going to make sure that we sort of attack everyone that needs the help along the way, the mentorship along the way. Someone helped us--very challenged youth along the way--and if we can do that to someone, we can change not only Henry County but change recidivism and change the state of Georgia and subsequently change these United States," Sheriff Scandrett explained.

The two men announced the new partnership outside "A Friend's House," which is an emergency shelter for youth in crisis located just across the street from the sheriff's office. O'Neal said through a partnership with Pepsi, he has purchased new furniture for the shelter and plans to upgrade the entire facility. 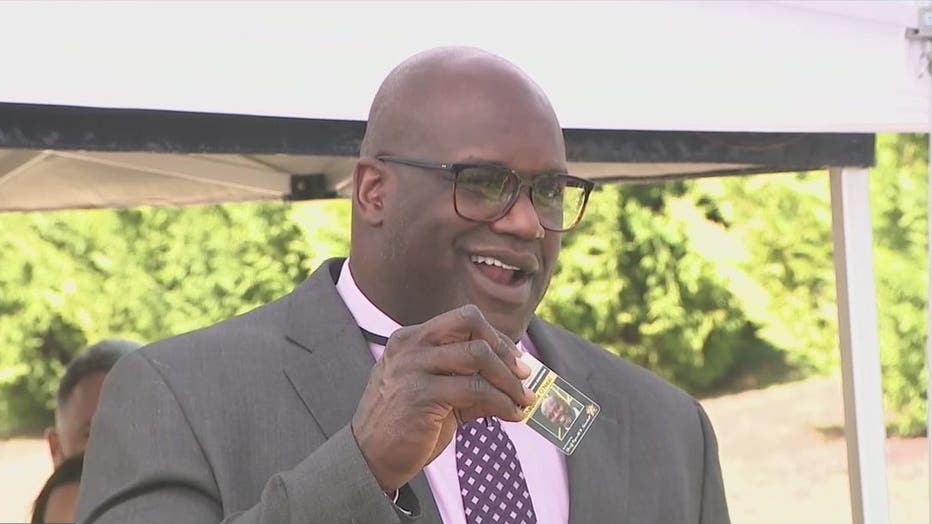 NBA legend Shaquille O'Neal shows off the keycard to his new job at the Henry County Sheriff's Office as their director of community relations during a press conference on Jan. 22, 2021. (FOX 5)

"When they walk in there, I want them to feel like I'm their father--luxury beds, luxury furniture, nice paint, artwork. There's a gaming place around the corner. I'm about to go there and rack up on games. I want these kids to be able to feel good about themselves," said O'Neal.

The NBA star said he has always given back to the community and while some of his projects will be made public because of this role, others will remain unpublicized.