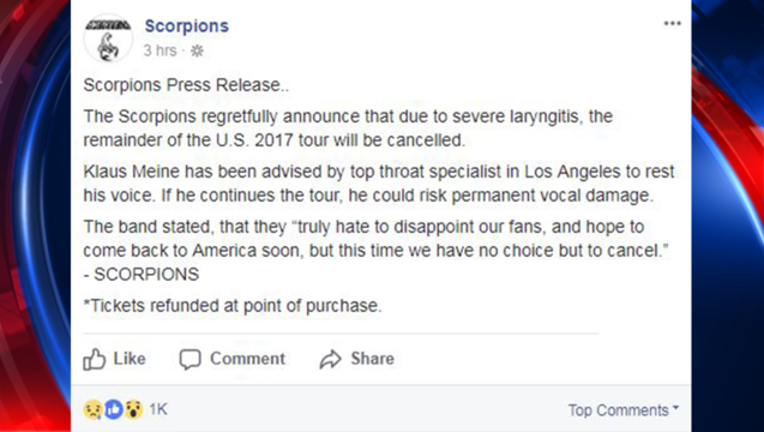 PHOENIX (KSAZ) - German band Scorpions has announced the cancellation of the rest of its U.S. stops on its 2017 Crazy World Tour.

The band issued a statement on its verified Facebook page, as well as its verified Twitter page on Sunday morning to announce the cancellation. According to the statement, Klaus Meine, the band's lead singer, has severe laryngitis, and has been advised by a specialist in Los Angeles to rest his voice, or risk permanent vocal damage if he continues the tour.

The band also said, in the statement, that they hope to come back to America soon.

According to the Talking Stick Resort Arena website, the band was scheduled to perform at the Downtown Phoenix venue on Sunday night, with tickets having gone on sale in April.

Tickets, according to the band's statement, will be refunded at the point of purchase. According to a Facebook post by the band, they were scheduled to perform in Phoenix on Sunday, followed by San Antonio on Wednesday, Dallas on Thursday, Fort Lauderdale on Saturday, and Tampa on Sunday.

Scorpions was formed in 1965, and is known for their 1984 song Rock You Like A Hurricane, among other songs.