Firefighters responded to a 3- alarm fire Wednesday afternoon. Dozens of people have been displaced. There are no reported injuries.

ATLANTA - Fire crews spent roughly 10-hours on the scene of a large apartment fire on Main Street in northeast Atlanta.

The fire was reported at 517 Main Street NE, near the Lindbergh MARTA station.

According to Atlanta Fire, all hands are working to put out the blaze, which has spread throughout the attic of the four-story apartment building.

During the attempt to put out the blaze, the building partially collapsed, officials said.

There are no reports of anyone injured at this time.

According to the Red Cross, they are assisting 101 families, or 162 people, with temporary lodging, food, clothing, personal care items, and health services.

They said nearly 90 units have fire, smoke and water damage.

A massive apartment fire in Buckhead displaces dozens of families.

Several residents who spoke with FOX 5 said they likely won't know just how bad the damage is until Thursday.

"I'm just really hoping it doesn't reach my apartment," Elle Neufeld, who got a call from her friend about the fire, explained.

Officials say part of one the buildings at Avana on Main apartments collapsed as fire crews battled the 3 alarm fire.

Antoine Schand said he didn't realize what was going on until he lost power.

"I just walked into a big cloud of smoke," he explained after going outside to see what was happening.

A fire supervisor told FOX 5 crews are still determining how many units were destroyed or damaged.

Firefighters responded to a 3- alarm fire Wednesday afternoon. Dozens of people have been displaced. There are no reported injuries.

Some folks barely had time to grab anything as they ran for safety.

"I have asthma, so I knew I had to get out of there," Yolanda Quintero who was visiting family described. "I put on the mask, brought my inhaler with me and got out of the building." 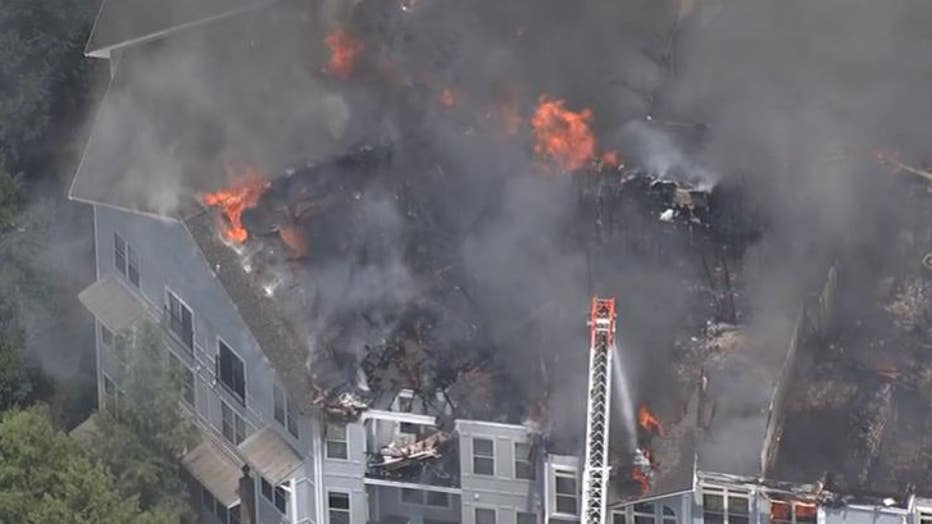 Tenants told us they believe the fire started in the H/VAC units on the upper level.

"One of them caught fire then another one and they all - there's like 12 of them up there," Mark Messer explained. "There's one bank of HVAC units and they all started popping and exploding and catching fire."