A 9-year-old's letter to Santa asking for food and clothing for his family inspired one postal worker to deliver some extra holiday cheer this year.

BLOOMSBURG, Penn. - When a postal worker came across a hand-scrawled letter to Santa asking for a few critical items for the child’s family, she knew she had to help.

Melissa Stinsman, a postal worker for the Bloomsburg Post Office in Pennsylvania, told Yahoo Lifestyle that her station keeps a special mailbox during the holidays to collect children’s letters to Santa. During this time of year, Stinsman spends four hours after she gets home from each shift to respond to the letters.

One of the letters that Stinsman opened last week was filled with many typical requests, such as a phone and Lego’s, but it was the last two items on the list that Stinsman said broke her heart and spurred her to action.

“Food for family” and “Clothing for family” were the last two items that the 9-year-old had asked for, and two stars beside the items on the list indicated that they were in the child’s “top three items.” 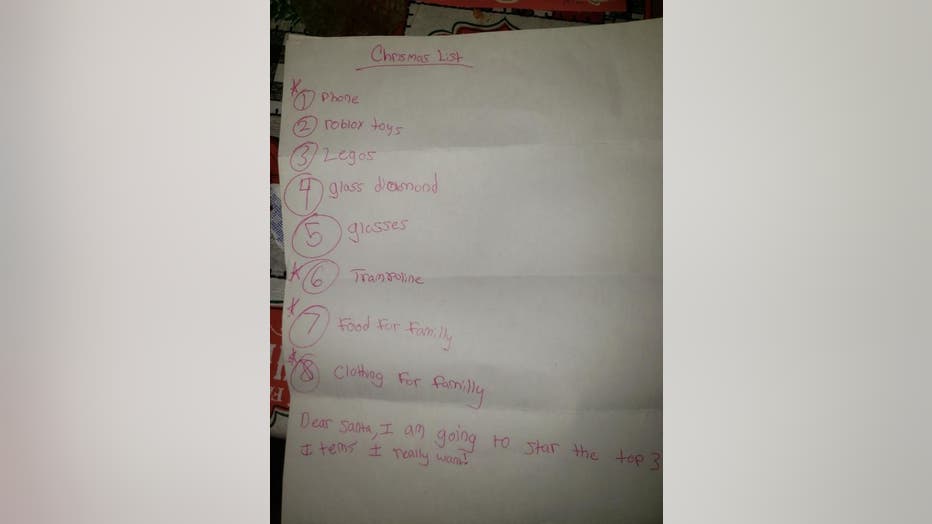 The letter a 9-year-old wrote to Santa asking for food and clothing for his family. (Courtesy of Melissa Stinsman)

The letter was sent in an envelope with two others — one was a wish list from the boy’s 5-year-old brother, and the second was an additional letter from the older boy.

“Dear Santa, last year you didn’t notice me, so I hope this year you notice me, and this year I will be good. I pinkie promise...” the 9-year-old’s second letter read.

“When I read the letter, I cried,” Stinsman told Yahoo Lifestyle. She said she wanted to help the boy and his family, but was stumped when there was no return address on the letters. Noticing that the boy had signed his full name, she was able to ask around the post office until she found the mail carrier who recognized the name from their route.

The next day, Stinsman found the family home and knocked on the front door. “I said, ‘Hi, this sounds weird but I work for the post office and I got your son’s letter. I’d like to help you guys this year,’” she told Yahoo Lifestyle. “The mom said, ‘Is this real?’”

Stinsman started a money pool for the family, which allowed the community to donate items such as gift cards, toys and clothing. She told Yahoo Lifestyle that they were able to raise about $500 in addition to extra food donations that were collected at the post office.

Stinsman said that gift cards to local grocery stores were given to the family early enough for them to prepare for Christmas dinner and that the rest of the gifts would be brought over on Christmas Eve — Stinsman said she hoped to deliver when the kids were distracted so that they’ll believe Santa really dropped the gifts off.

Stinsman wants to start a Christmas tradition, so she started a GoFundMe to support the endeavor, which she called "operation santa."  Stinsman told Yahoo Lifestyle, “It’s doable if everyone comes together.”