SEAL BEACH, Calif. - Authorities in Seal Beach were investigating a hate crime after a threatening letter was mailed to an elderly Asian American woman residing in an adult community on the day of her husband's funeral. 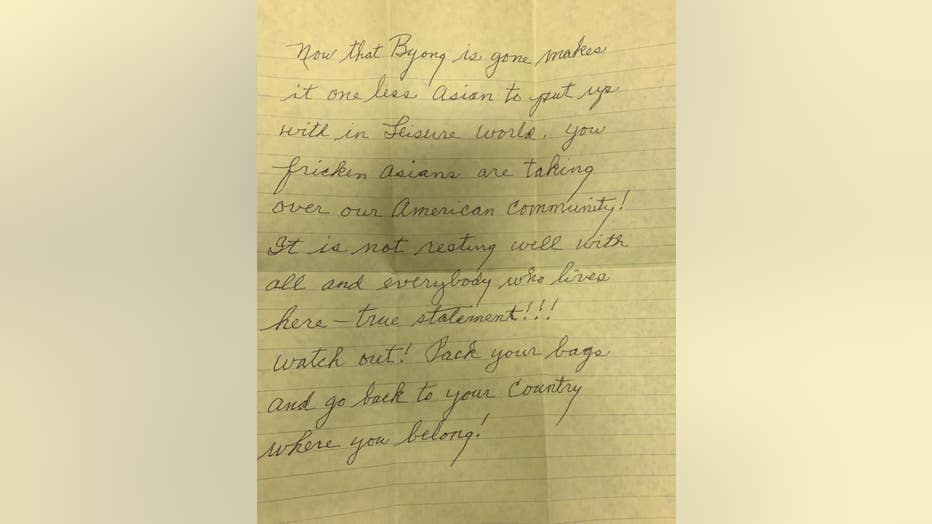 On March 22, the Seal Beach Police Department said they received a call from a resident at Leisure World, which is a community for those aged 55 and up. The caller stated that their elderly mother received a threatening letter in the mail.

Police said the anonymous letter was handwritten. Some of the derogatory language used in the letter said: "Watch out! Pack your bags and go back to your country where you belong!"

UPDATE: 'She is in her country': Seal Beach family responds to person who sent threatening letter to newly widowed mom

Investigators said they were working diligently and their efforts include DNA and fingerprint analysis, handwriting analysis, neighborhood canvass, and video surveillance review.

"Hate directed toward any member of our community is disgusting and will not be tolerated," said Seal Beach Chief of Police Philip L. Gonshak. "Across the county we are seeing more and more violence committed against Asian Americans and Pacific Islanders. We will not allow this to happen in Seal Beach. Our investigators are working hard to following up on any and all leads we receive."

There are several charities and organizations where people can donate to help ensure anti-Asian hate is stopped. They include: