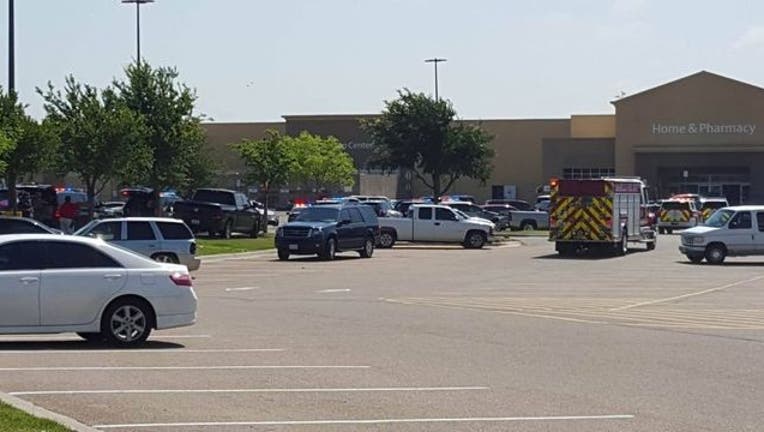 AMARILLO, Texas (AP) — Officers fatally shot an armed man inside a Wal-Mart store in Amarillo, Texas, on Tuesday after he took two people hostage, including a manager with whom he had a work-related dispute, according to police.

Amarillo police identified the suspect as 54-year-old store employee Mohammad Moghaddam and said neither hostage was injured. Police said the incident began over a dispute related to a promotion and called the incident a "workplace violence event."

"This individual had an ongoing difference, dispute or feud with a manager at Walmart," said Amarillo Police Sgt. Brent Barbee. "There is absolutely no information or reason to believe that this is a terrorist event."

Officers responded to an active shooter call at the store around 11 a.m., amid reports that an armed person was inside and may have had hostages.

According to investigators, Moghaddam entered the store and fired at least one shot toward the ceiling. Police don't believe the suspect, who was armed with a handgun, fired any other shots.

Authorities initially believed he took a hostage and went into an office in the back of the store, according to a police statement.

"We knew there were hostages inside the business, so (SWAT) went in with the intent to free the hostages," Barbee said.

Around 12:20 p.m., SWAT officers watched what they had believed was the only hostage come out of the office. The officers entered the room and discovered the second hostage.

"The suspect was still armed with a handgun and was a threat to the hostage and the officers. Two SWAT officers fired shots which hit the suspect. Initial information is that the suspect died immediately," police said in a statement.

It was not immediately known if the other hostage was a store employee or how that person became a hostage, Barbee said.

Wal-Mart spokesman Brian Nick released a statement earlier Tuesday saying all store associates and customers were safe. Nick thanked officers, saying, "This was a very difficult situation and we are thankful for the quick response from law enforcement."

Authorities said the investigation was ongoing in Amarillo, in the Texas Panhandle. Some nearby streets were closed as a precaution during the incident, including an off ramp to Interstate 27.

The Randall County Sheriff's Office said later Tuesday afternoon that all roads around the store at Interstate 27 had been reopened to traffic. The area around the Walmart was still closed but officers were letting people retrieve their cars from the parking lot.